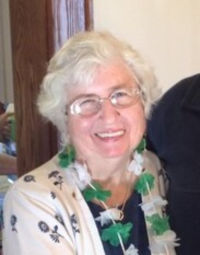 Visiting will be in the Prout Funeral Home, 370 Bloomfield Ave., Verona, NJ on Thursday, November 4 from 10 a.m. to 12 p.m., with a service at noon. Burial will follow in Hanover Cemetery, East Hanover, at 1 p.m.

Born in Montclair in 1936, Mrs. Davis grew up in West Orange and graduated from West Orange High School in 1954. In 1955 she married her high school sweetheart, Bob Davis, settling soon after in Verona to raise their family. Bob and Joan lived in Verona for 48 years before moving to Lanoka Harbor.

She was director of transportation for the Theresa Grotto Center in West Orange for many years and was a member of the Republican Club.