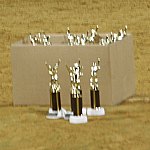 The UPRR LLC Yankees beat the Lapels Cleaners Giants 5-4 Sunday night before a capacity crowd at Everett Field to capture the 2011 Verona Baseball & Softball League’s Major League Baseball World Series, in one of the most closely played series in VBSL history.

The Giants got off to an early 1-0 lead when Mike Stanisci went yard for the second night in a row, in the top of the first inning. The Yankees took the lead back in the bottom of the first, after a single up the middle by Michael Daggett, Colin Kiernan hit a long home run into the cars in right center field to give the Yankees a 2-1 lead. The Giants regained the lead in the second, after two quick strikeouts by pitcher Anthony Pedicini, the Giants worked three bases on balls. With the bases full, Tino Quagliata drilled a bases-clearing triple to the right field corner, scoring Brian Nolan, Dario Spina and Jake Parent, and quickly the Giants had a 4-2 lead.

The Yankees did not go quietly. In the third inning, Daggett scored on a fielders choice by Robert Farley. In the fourth, the Yankees’ Brian Feury scored the tying run after a double to the gap by Dylan Gallagher.

In the Yankee 5th inning, after 2 quick outs, Matt Moran tripled to right center field off Giant pitcher C.J. Lavery, then Kiernan followed with a double to give the Yankees a 5-4 lead. Kiernan then pitched a 1,2,3 sixth inning to seal the deal.

There was solid defense all night by the Giants Greg Marlo, Jack Swanstrom, Chuck Cerle, and Michael Malanga, as well as the Yankees Johnny Walsh, Tyler Finerty, and Alex and Ian Ziolkowski.