A volleyball championship, divisional finishes, All-Conference honors, and the demolition of a 20-year-old record in football. Laura Palmerezzi, Verona’s director of athletics and special programs, highlighted all that and more in a recap of the fall sports season for the Board of Education on Tuesday night. 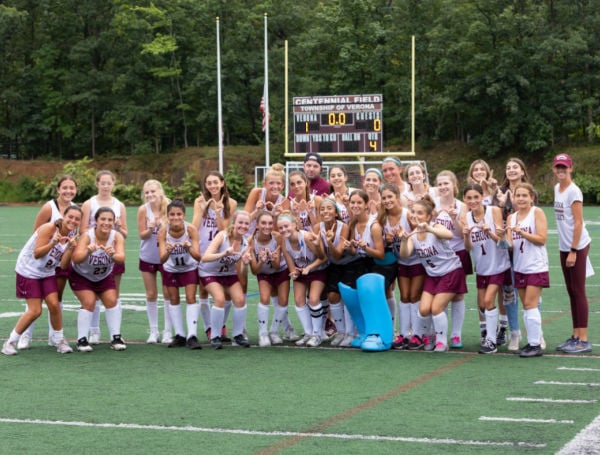 Field hockey, which is in only its second year as a varsity program, won the first round of the County tournament by upsetting a higher seeded team. Ava Perry and Marykate Dougherty earned First Team honors, Amanda Cavallo and Dani Imbriano were named Second Team, and Sarah Knoetig received Honorable Mention.

The girls varsity soccer team had an 11-6 season and finished in second place in the Liberty division. The team’s leading scorer was senior Grace Madigan, who Palmerezzi noted, scored 27 of Verona’s 65 goals this season. Madigan, who scored her 100th career point on October 21, got First Team honors along with Brooke Rienecker. Emma Zalewski, Victoria Niziolek and Ella Mathewson earned Second Team, while Ella Moore and Amelia Niziolek received Honorable Mention.

Boys soccer finished 9-7-2 and was just one penalty kick short of taking the N2G1 semifinals. Six players were named to the All-Liberty team, seven made the All-Essex team, and three were honored with a place on the New Jersey Soccer Coaches Association’s All-Star team. Nick Handler and Christian Despecci earned First Team, Andrew Della Fera and Riley Ying were named Second Team, and Alexandre Jean and Marcus Beninghof made Honorable Mention.

There were milestones and honors for cross country as well. The boys team placed fifth in the American division and seventh overall in highly competitive Essex County, third in the N2G1 Sectionals and qualified for the Group championships. The team won sophomore and senior team titles at the Essex County Invitational. The freshmen boys team was third at the season opener and fourth at the Essex County Coaches Invitational. Ian Zalewski earned First Team, Milo Attal got Second Team, and Connor Robinson and Noah Hayden received Honorable Mention.

The girls cross country team finished the season with a 9-1 record, a second place at Sectionals and qualified for the Group championships. It placed first in the senior division at the Essex County Coaches Invitational. Annalie Ying earned First Team; Katherine Repoli, Jessica Day, Kara Dunphy and Lily Nachbaur were named Second Team; and Lucy Hogan and Meghan Kenneally got Honorable Mention.

Palmerezzi noted that Verona’s cheer team placed second in the Liberty division for best stunting at Bloomfield’s Cheer for a Cure, which raised $5,000 for the Food Bank of New Jersey. The team’s own Cheer for a Cure event raised money for breast cancer awareness and the Minette’s Angels Foundation.

The VHS football team finished with a 4-5 record overall and was 3-3 in its division. Dan Vecchio was honored with the conference’s Young Man of the Year award and will be recognized at MetLife Stadium on January 10. Cael Zebrowski broke four school records: passing yards, completions, passing touchdowns and career wins. The first two records had stood for 20 years. Zebrowski was named First Team offense, while Vecchio and Brodie Neale earned First Team defense, and James Haveron got a First Team nod for Special Teams. Joe Petro and Ben Mackey made Second Team offense, and Alex Rodriguez earned Second Team defense. Derek Bernardino earned an Honorable Mention.