Mikie Sherrill, the former Navy helicopter pilot and federal prosecutor who is running to be Verona’s representative in Congress, drew more than 600 people to a rally at Montclair State University this afternoon, and she brought New Jersey Gov. Phil Murphy and former Vice President Joe Biden along to drive home the importance of the election.

Sherrill is the Democratic candidate for New Jersey’s 11th congressional district, a seat that has been held by Republican Rep. Rodney P. Frelinghuysen for the last 22 years. A seat thought so solidly Republican that it seemed folly for any sensible Democrat to seek it (or any Republican to challenge Frelinghuysen). There was so little competition for the seat over the years that filmmaker Michael Moore tried to run a ficus tree against Frelinghuysen in in 2000.

So when Sherrill declared her intention to run in May 2017, it was greeted with little more than a yawn. But the following January, Frelinghuysen said he would retire rather than seek re-election, and the race for NJ11th got a whole lot less vegetal. By the time Verona went to the polls for the primaries in June, there were five Democrats and five Republicans running. Sherrill won the Democratic contest and the Republican contender in the race is Jay Webber, who represents the state Assembly district that includes Verona.

Though Webber has styled himself as a Republican in the mold of former President Ronald Reagan, his recent public statements show ample support for the current Republican leadership. And that became a target for Gov. Murphy’s remarks to the crowd. “We cannot give this district to someone who will be a yes man for Donald Trump,” he said. “The wave will start here with Mikie Sherrill.” 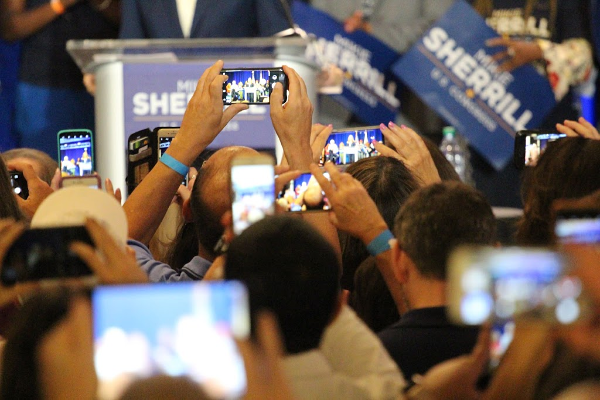 For her part, Sherrill stressed that many generations of Americans have had to deal with challenges that were not what they had expected, and they rose to the challenge. “We are at our best when we operation from confidence and optimism,” she said. “This country wasn’t only built by heroes. This country was built by ordinary people doing extraordinary things.”

Her remarks resonated with Verona Town Council member Ted Giblin, who was in attendance. “I feel that Mikie Sherrill’s resume as someone who has served our country as a Navy pilot, assistant U.S. attorney and mother of four children make her ideally suited to represent the citizens of the New Jersey 11th congressional district,” he said after the rally. “I am proud to support her candidacy.”

Though the rally was organized for a Democratic Party candidate, the speakers worked to make it a rally for America as a whole. “This is the most important election any of us have been in so far,” Biden said. “We must reestablish what America stands for.”

“We are in a battle for the soul of America,” Biden added. “That is not a Democrat or Republican thing.” And then, Biden got blunt, reminding the audience that he graduated college in the same year as the assassination of Dr. Martin Luther King Jr. and Robert Kennedy, events that seemed to put an end to the Civil Rights Movement that he had been drawn to as a young man. “Don’t tell me you’re demoralized,” Biden scolded the audience. “Get off your rear ends and vote.”

MyVeronaNJ.com has also reached out to the Webber campaign for access to Webber events and to interview the Republican candidate. We have not been given access to those events and Webber’s campaign manager said last Friday that there was not an interview opening for us “presently”. He requested questions in writing, which MyVeronaNJ.com has sent. We will publish Webber’s answers when they are received.

This video was produced by our partner news site MorristownGreen.com, which also reports on the NJ11 district: