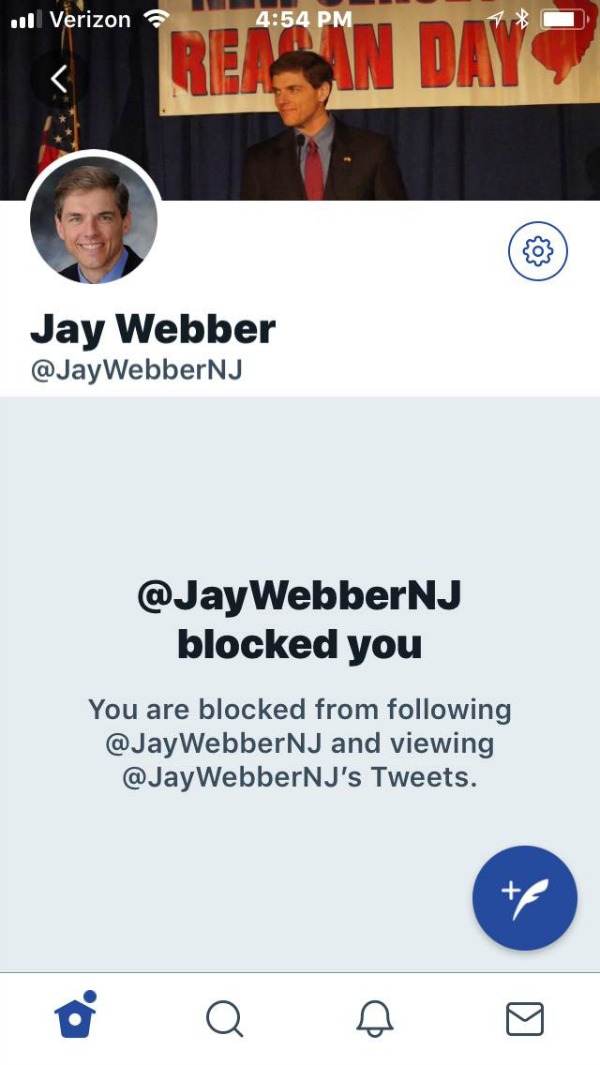 On Wednesday, a federal district court judge ruled that President Donald Trump had violated the First Amendment by blocking people from following him on Twitter. The decision by Judge Naomi Reice Buchwald has implications for Assemblyman Jay Webber (R-NJ26), who represents Verona in the New Jersey state Assembly, because Webber has blocked constituents from following his Facebook and Twitter sites. Webber is also one of five Republicans seeking to win the June 5 primary and become the party’s nominee in the race to succeed Rep. Rodney Frelinghuysen in the 11th federal Congressional district.

NJ11th For Change, a grassroots group formed to advocate for all constituents in the district, which includes parts of Essex, Morris and Passaic counties, has been tracking the Webber blockings through its Facebook group. Members have posted screenshots, including the image above, indicating that Webber has blocked them, and they have also been tracking when comments they have posted to Webber’s Facebook page have been hidden. The administrator of a Facebook group has the ability to delete comments or to mark them so that they are hidden from everyone except the original poster and people who are Facebook friends of that person. Most of the deleted or hidden posts were attempts to get Webber to clarify his position on issues or address issues of concern to that constituent, and not personal attacks.

“Politically, it is curious to me,” says Elizabeth Juviler, the political director of NJ11th For Change. “It just doesn’t seem to win friends. It’s like [Webber] hasn’t been paying attention in the last 18 months.” Juviler discovered that she herself has been blocked by Webber Twitter account when she attempted to Tweet the federal district court ruling to it yesterday.

Verona residents are among the constituents who have been blocked. During the outreach session by state Sen. Joseph Pennacchio at Monday night’s Town Council meeting, Laura Fortgang asked the legislator to ask Assemblyman Webber to stop blocking his constituents on social media. Both Fortgang and her husband have been blocked by Webber’s social media properties, and Fortgang praised Pennacchio for his welcoming of discussion on social media. “You have engaged in reasonable discussion with people who don’t agree with you,” she said.

MyVeronaNJ.com called Webber’s office at 9:25 this morning and again just after 2 p.m., sent an email to his campaign address and messaged the assemblyman through Twitter seeking to learn whether he will alter his social media policies in the wake of the federal court decision. We have not received a response to our outreach.

None of the other Republican or Democratic candidates in the Congressional race are sitting legislators, so they would not be affected by the court ruling. There have been no reports to the NJ11th for Change Facebook group of blockings by other candidates.