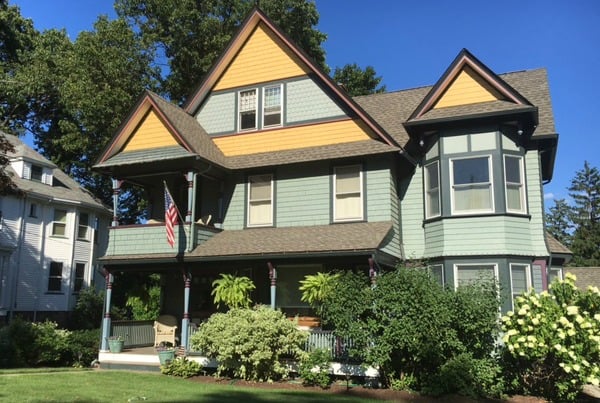 If your idea of an old house is something built before 1970, you might be surprised at how many really old houses there are in Verona. True, we’ve lost two gems of pre-1900 architecture in the last year, a Civil War-era house on Mountainview and a Victorian built for a world-famed industrialist. But by combing through property tax records and history books, MyVeronaNJ.com has uncovered as many as 70 houses that were built before the 20th century, and three that were likely constructed before the 19th century dawned.

Some of these houses do indeed look old, like the Enos Martin House or the Brower-Hathaway House, both reminders of a time when Verona was largely farms feeding the metropolis of Newark. Some are grand, like the brightly painted Victorian on Fairview Avenue above, but many are humble, like the clutch of small houses on Pine Street near what was once a busy railroad line. Some still have their original facades, like the Irma Ott House, but many of Verona’s oldest houses are effectively hidden in plain sight, behind new siding, expanded construction or use as a business. The barbershop we all know as Dino’s was actually built during the Civil War as the home of the Zabina Williams family. Often, the chimney stack is the only clue that the structure is anything but modern.

Though many of Verona’s earliest houses have been lost to fires (the new Grove Park is where Henry B. Whitehorne’s house once stood) or demolition, some were preserved by being moved from Bloomfield Avenue to side streets like South Prospect as the avenue changed from residential to commercial.

Some of these houses were the sites of key moments in Verona’s history, like the Mrs. King House on Brookdale Avenue. Its namesake gathered the books that became the original collection of the Verona Public Library. The stories of many others have been obscured by the passing decades, but Verona’s Landmarks Preservation Commission is working on a new historical survey that could bring them to light. (Verona does not forcibly landmark structures, but by working with owners the Commission has gotten designations for the former Erie Railroad freight shed and the Verona United Methodist church.)

We’ve gathered photos of most of Verona’s oldest houses in the video above, which is best viewed full screen so you can see the construction dates. The slideshow that starts on the next page has some of the more notable properties. If you want to know more about Verona’s history , a good place to start is Old Verona, a book by Robert L. Williams.