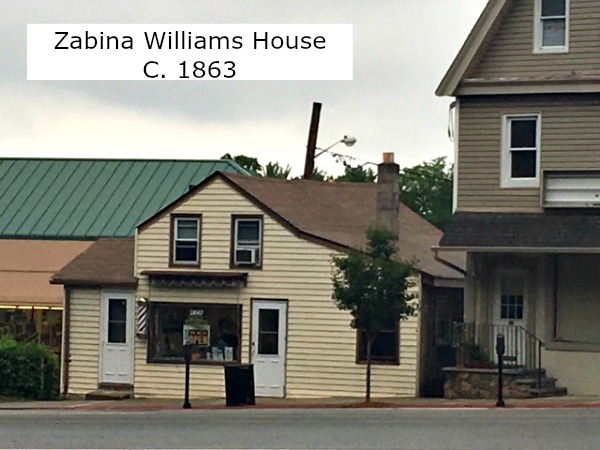 Long before it was Verona’s oldest barber shop, the little structure at 478 Bloomfield Avenue was built to house a family.

In his book, Old Verona, Robert L. Williams says that a man by the name of Zabina Williams built the house in 1863. Williams appears to have been born in Caldwell, and had three sons: George W. Williams, who served as a private in the Civil War; Cornelius Williams, who built a house at 222 Claremont Avenue that still stands; and Charles Williams, who apparently died young.

This 1940 photo of the shop in Williams’ book gives an idea of what the house might have looked like when it was occupied by the original Williams family: A single ground-floor window instead of the large pane, and a small porch to the right that has since been enclosed.

MyVeronaNJ.com reader Jo O’Brien says that the property was eventually bought by her father’s uncle, Joe Tucci. “He lived upstairs and ran the barbershop downstairs for many years,” she says. In the early years of Verona–and well into the 20th century–it wasn’t uncommon for Verona business owners to live over, or behind their shops. When Bernice Evenson died in 2010, her family recalled that, during the Depression, she and her husband had lived behind a curtain at the back of their clothing store at 555 Bloomfield Avenue.

O’Brien’s uncle had other real estate holdings in Verona besides the tiny shop. “He also owned a large parcel of land down the street from where that triangle building is on Bloomfield Avenue,” she says, referring to the so-called Flat Iron Building at the intersection of Fairview Avenue and Pine Street. “It was a very big lot with a garage. My family and I would visit him and go there where we had a garden and he also had fruit trees on the property. Great memories and may lazy Sundays spent there enjoying picnics and good times.” O’Brien says that Tucci offered at one point to sell her family the land, for $7,000. “My parents had just come here from Italy and at the time didn’t have the money to pay it.”

In the early 1970s, the barber shop began its transition to its current ownership. Dino Ditizii had recently arrived from Foggia, Italy and got a job working at the shop. In 2012, he celebrated his 50th year of cutting hair there.