Town May Save Historic Freight Shed 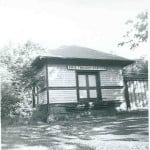 A tiny Verona structure is getting a lot of attention these days–and may become the town’s first official historic landmark. At Thursday night’s meeting of Verona’s Landmarks Preservation Commission, its  members voted unanimously to recommend that the Town Council designate the railroad freight shed on the property at 62 Depot Street a landmark. If the recommendation passes a vote of the council, the shed will be the first structure to be added to the town’s  historic preservation ordinance.

The building, which is on property owned by the Poeckel family and Donald Wilson and is currently being used as a  storage shed, was built by the Erie Railroad company about 1890. It sits next to the old rail bed for the Caldwell line, which ran from Little Falls to Essex Fells for much of the last century. “All along that line were sheds like this, and every single one has been destroyed, demolished or vandalized,” says Jane Eliasof, Chair of the Landmarks Preservation Commission. “It is the one remaining structure that pays homage to that busy, bustling time.”

Remarkably, the shed survived two fires, one in 1905 and another in 1960, that destroyed the adjacent passenger stations. According to Gerald Caprio, president of the Verona Historical Society, passenger service on the Eric Railroad ceased in the mid 1960’s; freight service ended in the early 1970’s, and the track was removed in the early ’80’s. The hiking path we wrote about in December, which runs from the high school to Little Falls, follows the former track bed for the line.

If the freight shed is entered into the ordinance as a landmark, the owners are committed to retain the building’s appearance and historical integrity. “The owners are really to be commended,” says Eliasof. “They are  excited about the opportunity to preserve this piece of Verona’s history.”