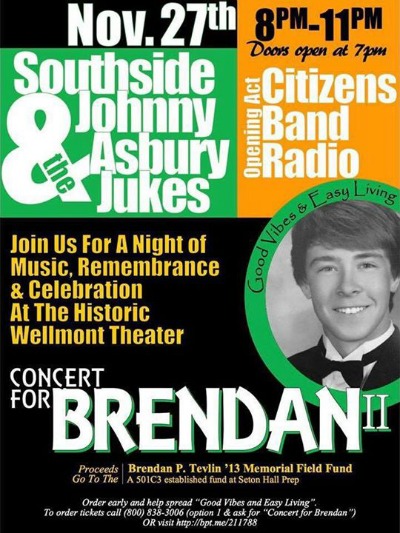 Brendan Tevlin loved music and he loved the Jersey Shore. So it is entirely fitting that the Thanksgiving weekend concert celebrating the life of the nephew of two Verona families will have as its headliner Southside Johnny & the Asbury Jukes.

After Tevlin was murdered in West Orange in June 2014, his family and friends cast about for something positive that they could do to honor a young man who was, by all accounts, extremely positive. They committed to turning the Seton Hall Prep sports field where Tevlin had spent some of his happiest times into something that all could enjoy.

The first “Concert for Brendan” got the Brendan P. Tevlin ’13 Memorial Fund rolling, and it now has almost half of the roughly $1 million that will be needed to upgrade the field, which will accommodate not only the lacrosse that Tevlin loved, but also football, soccer and track.

“The family has been amazing,” says Matthew Cannizzo, director of institutional advancement at Seton Hall Prep, who is leading fundraising among the school’s alumni. “They are doing everything they can to get the field funded.” Cannizzo notes that the Tevlin family has multiple ties to the project: Brendan Tevlin’s uncle was Seton Hall Prep’s first lacrosse coach in the late 1980s and Tevlin’s father was the assistant coach. But he envisions the field as being about much more than sports.

“We want it to be a place where people can read about Brendan and learn who he was,” says Cannizzo. “Most of us cannot dream about having the impact on our communities that he had.”

Kathleen Tevlin Nulty, Brendan’s aunt and a Verona resident, is humbled by the response to the project. “We cannot thank the community enough,” she says. “It is turning something bad into something positive and lasting.”

The 2nd Annual Concert for Brendan will be November 27 at the Wellmont Theater in Montclair. All of the proceeds benefit The Brendan P. Tevlin ’13 Memorial Fund. You can buy tickets here, or, if you prefer, make a donation directly through Seton Hall’s Web site.