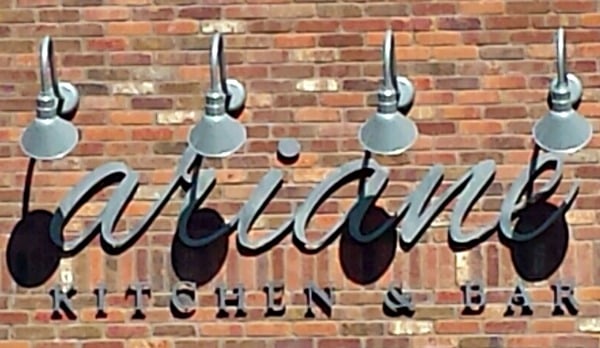 The Verona restaurant scene is about to change in a big, big way: On Monday, November 17, Ariane and Michael Duarte, and partner John MacEvoy will throw open the door to Ariane Kitchen & Bar.

“I am excited–and nervous,” says Ariane Duarte, as she dashed between kitchen prep and a photo shoot for the restaurant’s Web site today.

AKB occupies the Bloomfield Avenue space once home to O’Neil’s Pub and, before that, The Nest. But chances are, even if you spent every waking moment at those two establishments, you won’t recognize the place now. The stuccoed exterior has been replaced by brick and the ceilings have been opened to cavernous heights. There’s seating for 100 inside, including three long communal tables where you never need a reservation.

The story at AKB is like that wedding refrain: “something old, something new, something borrowed, something blue”. The “old” is the kitchen and wait staffs, all of whom came to AKB from the Duartes’ former Montclair restaurant, CulinAriane, including Verona’s Brent Danieli in the kitchen. AKB’s phone number, 973-744-0533, was “borrowed” from CulinAriane, which will make for an easy switch on the speed dial. The “blue” is to be found on the ceiling, a pale spring sky shade that complements the taupe and sand-colored walls.

And the “new” is everywhere in the space, which was gutted to the studs and recreated by MacEvoy, who also breathed new life into the Verona Inn name two years ago. There’s a new kitchen and new bar, which will be serving new food and new cocktails (CulinAriane was BYOB). There’s new art on the walls, thanks to Ariane Duarte’s aunt, Annette Lieblein, and Bloomfield artist Tom Muscatello.

If you were lucky enough to dine at CulinAriane, you’ll be happy to know that its signature oyster and tuna dishes will be on the menu at AKB. They have been joined by “snacks” like pretzel bites with beer cheese sauce and miniature Cuban sandwiches, and main courses that include an American Kobe burger, brick-pressed chicken and braised short ribs. (The kitchen was prepping today for a “family and friends” dinner. We didn’t get any tastes, but the burrata and cherry tomato ravioli looked like heaven.)

“I make things that I like to eat,” says Duarte. “I want to take simple ingredients and make them into something fabulous.”

Prices are new, too. In keeping with the Duartes’ commitment to making AKB a place for every day eating and not just special occasions, the menu starts at $6 and stops at $28. (The side room, complete with a handicap-accessible bathroom, can accommodate special occasions, though.) The signature cocktails–$12 each–include an AKB Mule with house-made pomegranate-infused vodka and an AKB Margarita with cinnamon-infused tequila.

Not everything was finished as of Monday afternoon: Table tops were still being attached to table bottoms and the back patio is still just a gravel surface. The Web site is only one page. But if AKB feels like a well-worn Verona home to its new guests next Monday, there will be a reason for that: Ariane Donadio Duarte grew up here, as did her father before her. “I never imagined I’d have a restaurant in my town,” says Duarte. “I’m very proud to have my name hanging outside.”