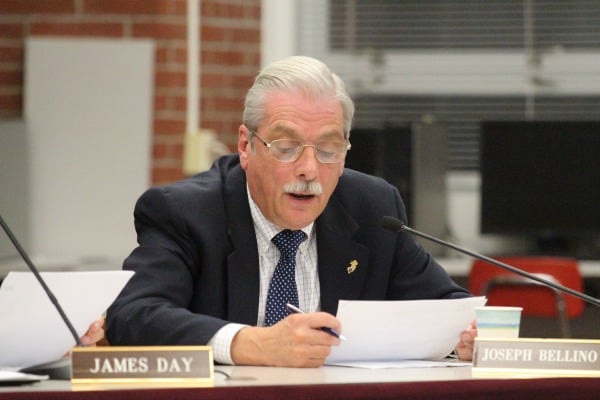 The lower football field at Verona High School appears to be turning into a political football.

At last week’s Board of Education meeting, a visibly frustrated Board member Joseph Bellino (above) disclosed that when the BOE’s architects filed the field plans on October 3, Verona Township Engineer Jim Helb indicated that it was, in Bellino’s words, “not likely” that the Planning Board would review the plans for the redevelopment until January 22, 2015. Helb is also a voting member of the Planning Board.

Planning Board attorney Greg Mascera is looking into an assertion by opponents to the field’s renovation that it is something other than a school facility. If he sides with them, the normal 45-day “courtesy” review of the project by the Planning Board could turn into a full-blown hearing. Mascera said Friday that he had spoken to lawyers for both sides and would do so again this week “to get clarification on their positions”. He said that he would advise Helb on his talks and that the two would then make a determination on whether the work could proceed as submitted.

And when Township Manager Joseph Martin was asked this morning how Helb could have made a determination on the date of the hearing if Mascera had not made his determination on the legal issues, Martin called Helb and said he was told that “the application is not complete. The clock has not started ticking.”

If the BOE cannot open the field renovation to bidding in early January, the field will not be finished by September, when it is slated to be used by football, soccer and the VHS marching band. The delay, if it comes to pass, could further exacerbate relations between the town and the BOE, which have been at a slow boil since the referendum passed on March 11 by the widest margin of any Verona referendum. The BOE has publicly complained about Helb’s interference in the project and the town backed off funding the resurfacing of the track behind H.W. Whitehorne Middle School even though the track is used by residents and Recreation Department programs, not just the schools.

Early this summer, a lawyer representing Verona residents opposed to the referendum’s implementation notified the BOE that he believed that, under state law, the field was not an educational facility but rather something that the state code now calls “other”. Construction work on educational facilities need only be submitted to municipal planning and zoning authorities for a courtesy review, which must be completed within 45 days of the plan’s submission. Planning authorities can make suggestions for changes, but school officials are not required to implement them. The BOE also submitted the work done under the 2005 referendum for a courtesy review.

Work on “other” facilities, however, must have full review by planning authorities. The BOE said after the letter was submitted that its lawyer had reviewed it and believed that its assertions did not apply.

Bellino repeated the board’s position that only a courtesy review is needed when he spoke at the October 7 BOE meeting. “Statutorily, the Planning Board has 45 days from receipt of the plans to review them and get back to us with any deficiencies or comments,” Bellino says in the video below (at the 15:32 mark). “We have a slight anomaly in that the town engineer has indicated that it is not likely that the plan can be reviewed by the Planning Board until January 22. So that matter is to be resolved. We think that the 45-day clock has started,” Bellino added. “We have a bit of a problem here.”

The lower field at Verona High School has been a school field since 1956 when the high school opened. The entire property is zoned as a school facility by the Township of Verona. But the lower field has not been used as the main school field since the late 1970s, when the upper field was expanded for football use. The landfill used in the expansion has since settled, causing a host of problems: A sinkhole opened in one end zone a decade ago and two others in 2012.

As a result, the field renovation was part of the March 11 referendum, which passed by 1,777 votes to 1,067, a huge margin of 710 ballots. (The 2005 referendum passed by just nine votes.) Since then, a group calling itself “Be A Good Neighbor” has sought to block the referendum’s implementation. Its Web site at one point contained information that BOE President John Quattrocchi faulted as rumors coming from Helb. (The registration of the Web site has lapsed and its former contents are unavailable.)

At the October 7 BOE meeting, Quattrocchi sought to downplay the problem in response to a question by Joanna Breitenbach (listen just after the 37-minute mark in the video above). “According to our attorneys we over-submitted in terms of information, but we wanted to err on the side of caution,” Quattrocchi said. He added that there are five or six meetings on the Planning Board calendar between now and January and that for the BOE not to be on one of them “would be pretty odd.”

“We’re taking an existing field and replacing the grass with turf,” Quattrocchi said after the meeting. “We’re not changing the dimensions of the field itself. We’re putting up lights to support lacrosse, soccer, football and band, and not baseball because that would require additional spending that is not in the budget. We took the recommendation from Mr. Helb and relocated the 100-year-old sewer line.”

The town’s actions have supporters of the field work perplexed. “Why wouldn’t the Planning Board meet on this in November or December, if Greg Mascera decides that they have to approve it,” asked Frank Ferrari, a Verona native with three children now in VHS athletics. The Planning Board has scheduled meetings for October 23, December 4 and January 5. In addition, there is a site plan and subdivision committee meeting on November 17 and a special meeting of the full board on November 20 to evaluate a plan to designate two lots opposite Richfield Caterers as a so-called area in need of redevelopment. If approved, that designation would deprive the BOE of tax revenue from the site. The Board has scheduled special meetings before, however, including one on the proposal for 176-200 Bloomfield Avenue, which Helb has supported.

Yet even if Mascera and Helb do determine that the field needs full Planning Board review, its opponents may not be there to listen. Barbara Bochese, one of the most vocal voices of Be A Good Neighbor, has listed her house at 9 Dodd Terrace for sale. The homes at 20 Dodd Terrace and 13 Dodd Terrace, which had both been owned by referendum opponents, sold in May and July respectively; the former was an all-cash offer at almost full price while the latter sold for $1,000 above its $489,000 list, which was 19.4% above its assessed value. (Be A Good Neighbor supporters have frequently asserted that the field work would depress real estate on surrounding streets.) Be A Good Neighbor has been soliciting donations for legal expenses; it is not known what, if anything, it has accumulated.

Carlo Calabrese Sr., a referendum proponent, is frustrated. “You look at progressive towns all around with state-of-the-art athletic fields and you just shake your head how a selfish few can try to stop long overdue updating to our facilities that was approved by the Verona voter,” he said. “Our children and student athletes deserve better. Our teachers, coaches and band members deserve better and to not move forward with a brilliant project is just nonsense. Ultimately, the taxpayers and the children of Verona lose and the lawyers win.”