BOE Likely To Run Without Town On HBW Track Repairs 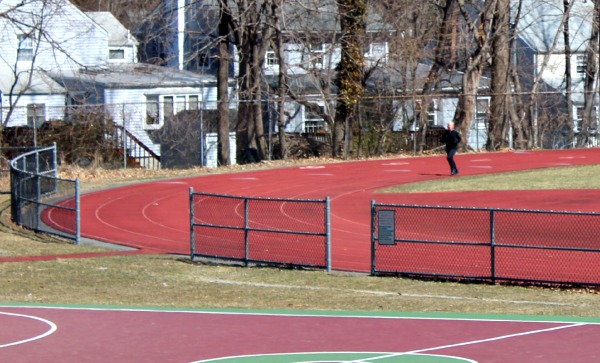 The Verona Board of Education said at last night’s meeting that it is going to go ahead with resurfacing the track behind H.B. Whitehorne middle school, but not in the way that many project-watchers had assumed.

“The indication that we had that the municipality would assume responsibility for the resurfacing of the track seems to not be coming into fruition,” said Joe Bellino, a member of the BOE’s buildings & grounds committee. “The committee is recommending that we go forward on our own.”

The track, which was built in 2001 in partnership with Montclair Kimberly Academy, was closed in December 2012 because part of its surface had separated from the underlying material. The BOE was able to make enough repairs to it last spring that it could be used again, but it was clear that the track would have to be replaced and a drainage issue on one section fixed. The BOE and Verona town officials talked about what role the town could play in the repairs, since the track is also used by Verona Recreation Department programs and the community at large.

Instead, Bellino said Tuesday that Paul McDevitt, the schools’ facilities director, will remediate the drainage problem “within the scope of his budget” and that the repaving of the parking lot at HBW, which is planned under the referendum, will also alleviate some of the problem by redirecting building run-off. The BOE and MKA will share the cost of resurfacing, which was not spelled out at the meeting.

“If the town decides they have the means to participate,” Bellino added last night, “we will welcome them back.”

But all may not be lost. Verona Township Manager Joe Martin said Wednesday that town engineer Jim Helb will be meeting with McDevitt and Superintendent Steve Forte next week, and the track will be a “discussion item”. “The track is used by the community as much or more than by the students,” Martin conceded.