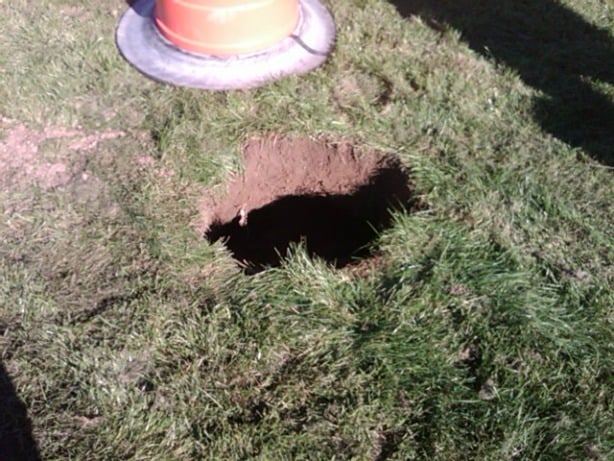 Things may have officially gone from bad to worse for Verona High School’s main football field. On Thursday, a new hole opened on Thomas J. Sellitto Field, as the upper field closest to VHS is known.

The hole is about two feet in diameter, and is located close to the 40 yard line on the visitors’ side of the field. This was not one of the problem spots identified in the radar scan completed in mid-September. The ground-penetrating radar, however, is only effective to a depth of eight feet, which could mean that whatever caused the hole to develop occurred beneath that depth. According to Board of Education President John Quattrocchi, the firm that did the scan will be back on the VHS field today, Friday, to conduct a new investigation.

The probes at the field, which has been closed to all usage, began after a hole opened on the field in August. That hole, which may have been a well shaft dating from when the high school property was used by a large orphanage in the 1800s, was almost as large as the hole that opened on Thursday and perhaps 15 feet deep or more. Ten years ago, VHS had to shift its home games to Centennial Field after a sinkhole developed in the southern end zone on the visitors side of the field.

That area was one of three problem locations highlighted in the radar scan. The scan also indicated concern about a spot near the well shaft, as well as a site on the Sampson Drive end on the visitors side, where there appears to be metal below the ground. The visitors side of the field was created in the late 1970s with landfill material obtained from an Edison Laboratories building that was being demolished. The BOE said at Tuesday night’s meeting that it would soon be having test bores done on the field, work that will cost Verona another $10,000.

Verona has moved the home season of the Hillbillies football team to the lower field, which is known as Doc Goeltz Field. That was the original football field for VHS from 1956 through 1978.