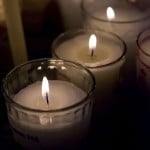 The Verona Public Library lost a true friend last week with the passing of Jerry Caprio. We asked our retired director, Jim Thomas, to share a few words about Mr. Caprio’s many years of service and dedication to the Library:

“Gerald T. Caprio, a founding member of the Friends of the Verona Public Library, died on October 3, 2014. Mr. Caprio, or Jerry as he was known, was a member of the original committee that organized the Friends group in 1982, and worked on the first Friends book sale during the same year.

Over the decades, Jerry became a mainstay of the annual sale, and would tirelessly unpack and sort boxes and crates of books to prepare for the event. Although some of the books were old and in questionable condition, he considered them all treasures, and took great delight in getting books into the hands of customers, especially children. Along with the bargains, people enjoyed his cheerful conversation and outgoing personality. He made the annual sale a pleasure for everyone.

Jerry always gave teachers special consideration, and insisted that when the sale was over, all remaining books were free to educators. Many classroom libraries were created or enhanced with book sale leftovers, including the former Children’s Residential Center in Cedar Grove, which Jerry developed himself.

His artistic abilities were also put to good use by the Friends of the Library. Jerry became the resident sign maker and flyer designer for the group, and could often be seen carrying his green canvas bag of art supplies to and from the library.

As a president of the Verona Historical Society, he cooperated with the library in enhancing the Verona archives. He was instrumental in filling in some gaps in the library’s collection of Verona High School yearbooks, and enjoyed speculating on the origins of the Verona “hillbilly.”

An active participant in local government, Jerry attended so many Town Council and Board of Education meetings, that his name and address are forever embedded in our memories. When not speaking at the podium at a public forum, Jerry could often be found sitting in the periodical section of the library with his companion Josephine, where he could read about history and art, and be totally immersed in the books he loved so much, in the library he worked so hard to support.”

–Our condolences to his daughters, Theresa and Cynthia, and to his companion Josephine. We’ll miss you, Jerry.