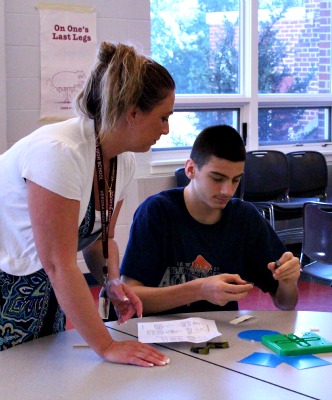 Dr. Nicole Santora, the curriculum supervisor for math and science who was brought to Verona by former Superintendent Charles Sampson, has left Verona to join Sampson at the Freehold Regional High School District.

The Board of Education announced Santora’s resignation at its July 30 meeting. Her hiring in Freehold had been approved at that district’s July 22 meeting. She will be the administrative supervisor for curriculum and instruction and her salary in Freehold will be $105,500. Had she stayed in Verona, her salary for the 2013-2014 school year would have been $102,747.

Santora is the third of Sampson’s curriculum hires to leave Verona. Patrick Higgins, the former supervisor for the humanities, left for Caldwell in 2011 after just one year in Verona. Elizabeth C. Jewett, who served as director of instructional studies, left at the end of the school year to become the new superintendent of Watchung Regional Hills. Sampson left Verona in February 2011 to become Freehold’s superintendent.

The BOE has not yet announced a replacement for Santora. In June, the board approved the hiring of Charles Miller, the former principal of Glenfield Middle School in Montclair, as our new director of curriculum.

Santora’s departure is one of several approved by the BOE in recent months. There were six retirements, including Elaine DeVita and Joan Serpico, both special education teachers; Marilyn Varallo, a first grade teacher at Laning for nearly five decades; Laning Principal Frank Albano; Keving Jennings, a second grade teachers at Forest; and Elizabeth Mastrosimone, English teacher at H.B. Whitehorne. There have also been three other resignations tendered: Jessica DelVecchio, a social studies teacher at Verona High School; Claudia Milojevic, a special ed teacher at VHS; and Andrea Granneman, a 6th grade teacher at HBW. And Forest will be without Elizabeth Buzaid: The fourth grade teacher is taking a leave of absence for the 2013-2014 school year.