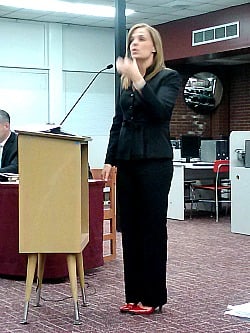 Elizabeth C. Jewett, director of instructional studies for the Verona public schools, will be leaving Verona to become the new superintendent of Watchung Regional Hills. Jewett, who was also serving as the internal coordinator of Verona’s next five-year plan for the schools, will take her new position on July 1.

Jewett has not submitted a letter of resignation yet, and the Verona Board of Education has not issued a statement on her departure. It is not clear what will become of the five-year plan work; many parents have put in a large number of hours as volunteers on the so-called action teams for the plan.

Jewett was brought to Verona in July 2009 by then Superintendent Charles Sampson. He also hired a supervisor for humanities, Patrick Higgins Jr., who left to become Caldwell’s supervisor of instruction in August 2011. Sampson left the district in February 2011 to become superintendent of the Freehold Regional High School District.

A former math teacher and K-12 subject area supervisor for mathematics and science, Jewett is part of a team of three curriculum specialists who are being paid roughly $500,000 as a group. Jewett made a lengthy presentation on the curriculum changes at the last Board of Education meeting, which you can watch at the beginning of the video below. Jewett left the meeting without taking any questions from the audience present. At the 1 hour 22 minute mark, Verona resident Joe DeVivo expressed frustration with the results of the changes, which drew acknowledgements from BOE members Joe Bellino and Dawn DuBois.

“One of the things that we thought was going to help correct the problem was the establishment of the position of the director of curriculum, which we’ve done,” said Bellino. “So it’s not for lack of trying. We have known of the deficiencies with our comp group, the old comp and the new, and frankly the results just haven’t come our way. All of the ladies who came here today were not here 10 years ago, and we still don’t seem to be making the push we had hoped for.”