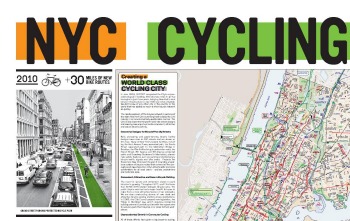 Maybe the kids have grown tired of riding their bikes around Verona Park. Maybe their biking skills are beyond the bike zone at South Mountain Reservation. Maybe they’re ready for something longer than the West Essex trail, or maybe they want a trail on a more scenic waterfront than the D&R Canal. If they are ready–and even if you think they aren’t–you’re going to want to hear about how the Garcia family tackled Manhattan on their bikes.

Last fall, this Laning district family piled the entire family into the mini-van, loaded the bikes and headed towards the Hudson. Their destination: 12th Avenue and 39th street in New York City, one of the key entry points for the bicycle greenway that wraps the west side of Manhattan. And we do mean the entire family, from a pre-schooler on a bike with training wheels to grandparents (you can see the whole clan in the photo below). They rode together all the way down to Battery Park City–that’s 3.8 miles down and another 3.8 back–on a car-free path.

“It was one of the coolest things we have done as a family,” says Pamela Garcia, who, as the owner of Portray Salon in Montclair, is much more accustomed to making hair look good than smushing it under a bike helmet.

One of the best things that New York City has done in recent years has been to make the city friendly to bikers. There are now more than 100 miles of car-free bike paths around the Big Apple, and a total of 620 miles of bike lanes. There are paths that go around Manhattan and through it,  bike parking racks and bike shelters, and even places to rent bikes if you want to explore the city but don’t have wheels of your own. The warming weather is a perfect opportunity to explore the paths and the next place the Garcias want to ride: car-free Governors Island.

The Garcias parked on the Jersey side of the Hudson and took the NY Waterway ferry across. The ferry costs $8.50 per adult and $5.50 per child one way from Weehawkin, with an extra $1.25 charge per bike. You can bring that cost down to about $7 by using a 10-trip ticket book. You could also drive all the way in and park at Chelsea Piers ($34 for four hours) or down by the Battery Park complex, which can be a lot cheaper, especially on weekends. If you don’t have a bike, you can rent one from Bike And Roll, which has five locations around the city, all on the bike path network. Day rates range from $39 for a gear-less beach bike to $69 for a tandem, and Bike And Roll also organizes guided tours.

But the Garcias simply wheeled their bikes off the ferry and headed south. Since many bike paths are open to joggers and folks on inline skates, they can get crowded (especially on weekends), but they are a heck of a lot better than the old days of riding in NYC, which often involved playing chicken with taxis. The waterfront path that the Garcias followed is flat, but the city does have more hills than you might realize if you’ve only ever traveled it by car.

The Garcias intend to take their bikes back to New York City in late spring, when the ferries to Governors Island are back in service. Located just off Wall street, this former Coast Guard outpost is now a car-free cyclist nirvana. Every 60 minutes on Friday, and every 30 minutes on Saturday and Sunday beginning May 27, there is a free ferry from lower Manhattan to the island, which has a 2.2 mile bicycle loop and lots of other riding areas.

You can get all the info on biking in New York City from the special Web site set up by Mayor Mike Bloomberg, who is determined to get more people to get around the city by bike. There is even a full bike path map, which you can download here.