A Bike Ride In South Mountain 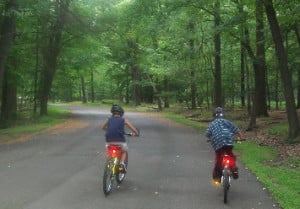 If you’re like most Verona parents, you worry when your kids go bike riding. They are safe enough on the sidewalks, but Verona’s streets aren’t always as biker-friendly as they ought to be.

The solution: A bike trail in South Mountain Reservation. I was tipped off to this one by my neighbors, Patricia and Dennis Bertron, who take their sons Aiden and Thomas to ride there. Crest Drive, on the eastern ridge of the reservation overlooking Maplewood, is wide, relatively flat and completely closed to traffic once you’re past the turnoff for the off-leash dog park. The kids can ride, scooter or skate unimpeded for about a mile and a half all the way to Washington Rock. If you are inclined to sneak in a little history on your outings, the signage around Washington Rock–and the spectacular vista from it of Millburn, Springfield and Union–should help you help them to understand why high points like this one were key to the Revolutionary War.

The trail won’t be much of a challenge to older kids, or younger kids who ride a lot, but it is a great space for those just losing their training wheels. South Mountain does not allow biking on the hiking trails, but a group called JORBA (the Jersey Off Road Bicycle Association) has submitted a proposal to the Essex County Parks Department to create a mountain biking area in the reservation. JORBA is also one of the forces behind the Hilltop Grasshopper, a bicycle race for kids that will be held on August 21 at the Hilltop Reservation in Verona. More about that in a separate post soon.

If your family has more hikers than bikers, the South Mountain Conservancy organizes a variety of hikes through the reservation. There’s one for hikers and their dogs on August 15, a longer route on August 28 and a loop through Tulip Springs to the waterfall on September 12 to show off some of the park’s new trail work (Verona’s Tom Jung is a South Mountain trail keeper). Check the Conservancy’s Events page for details.

Use the map below to get to Crest Drive. There are two large parking areas, one along the road itself and another close to the dog park.