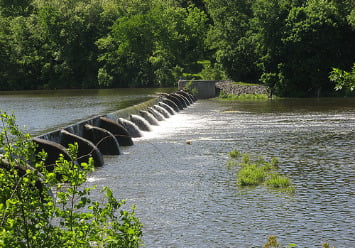 Once upon a time, 150 years ago or so, America needed a way to move goods from farms and factories in Pennsylvania and western New Jersey into New York City. The Delaware and Raritan rivers provided part of the way; canals dug alongside them did the rest. The Delaware & Raritan Canal has long been supplanted by trucks on highways, but the canal and the 60-some miles of paths created for the mules that towed the barges on it remain. They are lovely places for bike ride: flat, often shady and almost entirely free of motor vehicle traffic.

We’ve done the Delaware portion of the D&R several times in the past, riding in segments from Frenchtown to Lambertville. If you don’t want to haul your own bikes, or you don’t have the fat-tire bikes needed to ride the sometimes rocky canal paths, you can easily rent them in Frenchtown, which you might remember was one of George and Cathy Anderson’s picks for a day trip.

But we had never ridden the Raritan part of the canal. So in early July, just before the heat wave hit, we loaded up the bikes and headed down to New Brunswick’s Johnson Park. If you know New Brunswick only by Rutgers University landmarks, Johnson Park is just outside the south gate of RU’s fancy new football stadium on the Busch campus. (We’ve put a map to the park below, but the Delaware and Raritan Canal State Park has GPS coordinates to all of its parking lots on its home page.)

Park your car at the back of the Johnson Park lot and start your ride by going over the grass to Landing Lane Bridge, a small span crossing the Raritan. Turn right once you get over the bridge and walk your bike over the big, crooked cobblestones that cover the first 100 feet of the path.

After that, the riding is easy. We had to stop occasionally to pull gravel out of our tires, but the 10-mile loop that we did from Landing Lane Bridge to the 5-Mile Lock and back was quiet and wide enough in many places for the three of us to ride together. There are four other locks along the Raritan section of the D&R, but only two on the Delaware section; you can get the full trail map here. The locks add to the scenery along the Raritan path, but overall, we found the Delaware to be the more scenic of the segments. If you’re a camping family, you should know that you can also camp along the Delaware section just outside Lambertville. All the details on camping are here.

If you have older kids, you might want to take on the full D&R challenge, riding south from Frenchtown to Trenton and then east to New Brunswick. Just last week, New Jersey opened a 1.5 mile connection through Trenton to the two segments. That makes the D&R the largest completed segment of the East Coast Greenway, an ambitious project to build a 3,000-mile hiking and biking trail from Canada to Florida. If the weather cools off a bit, our next local ride will be the Hudson River Greenway in New York City. We’ll also be hauling the bikes with us on vacation to take one or two trail segments north of here.