The storefront at 144 Bloomfield Avenue is up for rent, so is the space that was occupied for decades by the Salon LuJon at 528 Bloomfield. There’s a vacancy at 630 Bloomfield next to Verona Camera and Nature’s Corner, the florist that has long occupied a sliver of real estate where Pine Street converges on Bloomfield Avenue, is up for sale. A large chunk of the Pilgrim Plaza spaces with Verona addresses are empty.

Yes, there are gaps in Verona’s commercial real estate. How bad they are depends on whether you tend to view the glass as half empty or half full.

Before you decide, walk through the center of Montclair and count the vacant storefronts from Park Street to North Fullerton Avenues. Montclair Center, the business watchdog group, recently gussied up storefronts with artwork, but stores that once held antiques, jewelry, restaurants and more are now very, very vacant.

Maria DiPaolo, who in addition to DiPaolo’s Bakery runs the real estate office that handles many of Verona’s commercial vacancies, Redwood Realty, pegs the vacancy rate in Verona at 10%, which she says is about normal. (Verona’s rental rates of $10 to $25 a square foot are about one-third less than Montclair’s.)

But that’s not how it feels, because some of the vacancies are so very, very prominent. On the eastern side of town, the old Celentano’s store, of late a car dealership, is empty. On the western side is the very forlorn looking Poekel Travel Bureau and its adjacent lot, which sits just past an empty lot controlled by the town. In the middle, is the old iHOP and a vacant lot that once held a photography studio. It probably doesn’t help that some of Verona’s operating businesses don’t seem designed to attract much in the way of foot traffic, like Katie Reilly’s Irish Soda Bread. 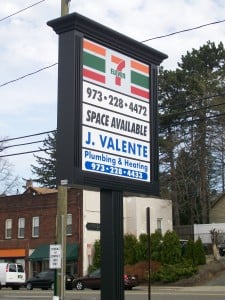 Some of the vacancies defy all logic. Joe Valente transformed a lot that held a carpeting store and a car repair business into a strip mall that has a 7-Eleven and 50–count ’em 50–street-level parking spaces. That should be gold in Verona. But three spaces in the mall, ranging in size from 1,200 to 1,600 square feet, sit vacant next to the high-traffic 7-Eleven. Valente says he could have restaurants in the spaces, but not another business that does coffee by the cup. (It’s not unusual for landlords to restrict the operations of some tenants so as not to infringe on the others.) Valente, a plumber by trade, says his asking rents are “closer to Verona’s than Montclair’s” and is prepared to be patient. “I’m waiting for good tenants with backing behind them,” he says.

Properties are being leased in Verona. A Subway sandwich franchise will soon occupy the old Liberty Travel space. The former home of Verona Fashion Opticians at 611 Bloomfield Avenue is being turned into a Chinese restaurant and 573 Bloomfield Avenue is being readied for an eyeglass store. Hardbodyz Fitness, a workout gym, has opened in the space that long belonged to Verona Plumbing Supply at 129 Bloomfield Avenue. Bob Brunner, whose family controls the vacant building and parking lot across Bloomfield Avenue from the Richfield Regency, says he has a contract to sell the properties. He won’t reveal the buyer and won’t hazard a guess as to when the closing will take place. There are plenty of rumors about the iHOP and adjacent vacant lot, but the folks who control them are deflecting questions for now.

There’s a little more to go on at Pilgrim Plaza. Richard Blenden is the executive property manager for the Blenden Group, the Millburn-based management company for the site. He says it has tenants in the wings for the stores once occupied by Mandees and the hair products retailer.  He says the former is a “name” retail tenant and the latter is a “seasoned operator” that already does business in several other locations. The old Blockbuster space is in limbo until its parent company decides whether or not to file for bankruptcy.  Together, the three businesses make up 17,000 square feet of retail space, renting in the range of $20 to $30 a square foot, triple net.

The map below shows a rough inventory of what’s for rent along Bloomfield Avenue. Most of the spaces marked are retail, and most are rental.