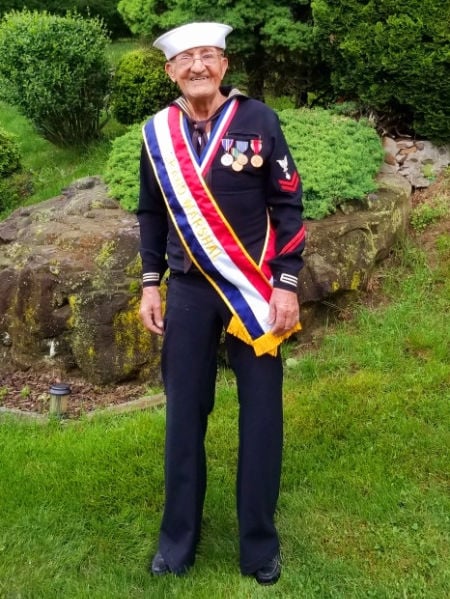 Mr. Michael A. Coppola, Jr., 97, of Verona, died on July 1, at the New Jersey Veterans Memorial Home in Paramus.

Visiting in the Prout Funeral Home, 370 Bloomfield Avenue, Verona will be on Friday, July 8 from 4 to 7 p.m.

A funeral mass will be offered in Our Lady of the Lake Church, Verona, on Saturday at 10 a.m.

Born in Newark, Mr. Coppola lived in Verona for 68 years. He worked for Otis Elevator in Harrison for 31 years with 15 of those years as chief engineer in the power house. Prior to that, he was chief engineer at Westinghouse in Hillside for 10 years.

Mr. Coppola served in the U.S. Navy during World War II and the Korean War as a water tender second class. He was a life member of the Veterans of Foreign Wars.

Mr. Coppola was president of the Essex Chapter of the National Association of Power Engineers and formerly a cubmaster of BSA Pack 5 in Verona. He was also a member of the Knights of Columbus, Marian Council.

Mr. Coppola was predeceased in 1998 by his devoted wife, Eleanor E. Coppola, and his sisters, Marie and Viola.

He is survived by his loving children, Michael A., III, George (Erin), Paul (Cindy) and David (Sharon) and his seven grandchildren and ten great-grandchildren.