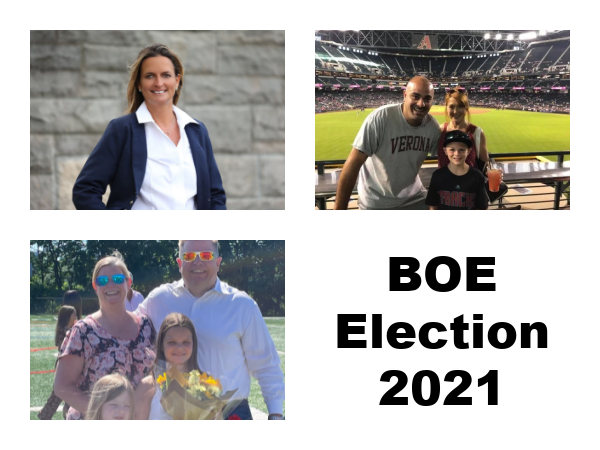 Pam Priscoe, Chris Wacha and Ron Mueller are the three candidates running for two seats on the Verona Board of Education on Tuesday, November 2.

To help readers to get to know the candidates, listed here in order of their place on the ballot, MyVeronaNJ interviewed all three via Zoom last week. There were four questions that were the same for all of the candidates, and another four that were specific to an individual candidate’s background, platform or public positions. You can read each candidate’s response to all eight questions on the pages below, which also include ways to learn more about them on the web and social media. In in the coming days, MyVeronaNJ.com will be grouping the candidates’ response to each of the common questions in an easy-to-read format:

Priscoe is seeking a second term on the BOE. A long-time municipal government employee and a graduate of Verona High School, Priscoe was the top vote-getter in the 2018 election, with 3,749 votes. During her term, she has served on the BOE’s Buildings & Grounds and Athletics & Co-Curricular committees. She acknowledged, in her interview, that she has come to regret being a sharp critic of the BOE in her first campaign. “Yes, I was very vocal at one point prior to me running for the Board of Ed,” she said, “and, looking back at it, it was extreme. ”

Wacha and Mueller, who are running as a team, have often been BOE critics during the pandemic, yet some of their positions did not hold up to scrutiny during their interviews. Where clarifications and fact-checking were needed, it is included in the interview transcript in italics. Wacha has been the principal of Haledon Public School, a pre-K to 8th grade school, for four years and was also named Haledon’s superintendent in September 2020. Mueller has had a 25-year corporate career at Mercedes-Benz, American Express and Volvo.

The Verona Conference of SCAs will be holding a candidates forum on Tuesday, October 19 at 7 p.m. in the auditorium at Verona High School. The event, which will be moderated by the League of Women Voters, will also be live streamed. The public can submit questions for that event to the Conference of SCAs by Friday, October 15, through this link. The moderator from the League will review the questions submitted and choose those to ask during the event.

BOE Candidates Question 1: What Does The BOE Do?