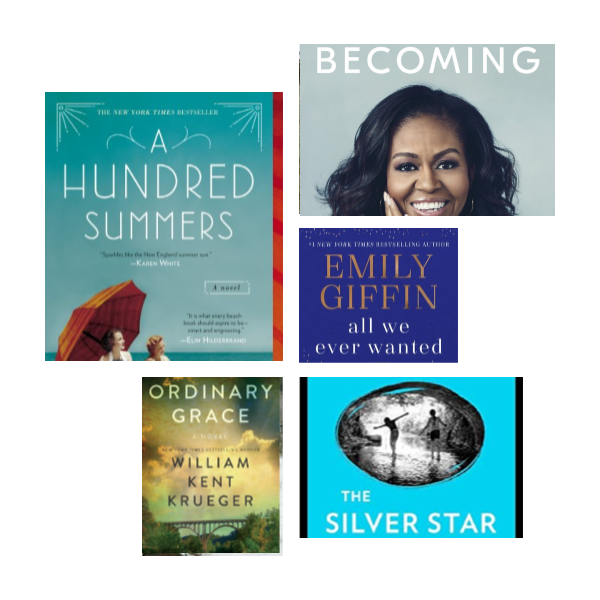 Two years ago, as I was sitting in a hospital waiting room as my father was having same-day surgery, Virginia reached out to me and asked me to put together a list of some of the best books I had read that year. Her suggestion was a godsend. It kept me busy as my mother and I waited. It gave me something to think about and reflect upon. Hence, I decided to do a similar article last year and now here were are at the end of the decade and I’ve put together another list. I’ve linked the books or authors on it to their Verona Public Library catalog page, where available, to make for easy borrowing and reading or listening.

As I write this I’ve “devoured” 71 books this year. This count does not include my re-read of half of Dorothea Benton Frank’s works. After her untimely death this September, it felt right and necessary to re-read her works. I re-read 10 and then felt like I needed a break as the summer turned into late autumn. My plan is to go back and re-read the rest over the summer months, because summer is not the same without Dorothea Benton Frank. And I highly recommend that in the summer of 2020 (if not before) you get your hands on one of her novels and enjoy. I especially recommend sitting outside in an Adirondack chair with a libation of your choice to sip as you do this.

But now on to the 10 best books I read in 2019 (reviewed in the order in which I happened to read them):

Honorable Mention (Because I read a lot of good books and even though these weren’t the absolute best of the best in my opinion, they were really quite good):

Beth Shorten is a life-long resident of Verona. For six years, she has been chronicling life here on her personal site, Bfth’s Boring Blog. You can read her best books for 2018 here, and her best books list for 2017 here.