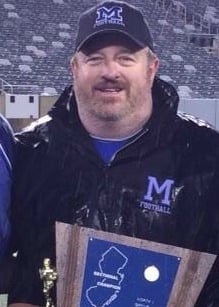 Batty, a Verona native and 1985 graduate of Verona High School, has been named the new head football coach at Verona High School. Batty played football for VHS under legendary Coach Al Rotella, and his senior year, when Hillbilly football went to the state championship, was Rotella’s last.

“It’s where I started,” Batty said of Verona by phone Tuesday night. “Coming home is a dream come true.” (His former classmates are among the many well-wishers on MyVeronaNJ.com’s Facebook page.)

Before coaching at East Orange Campus, Batty was the offensive coordinator at Montclair High School, helping guide the Mounties to three state championships and four Super Essex Conference Championships. Coach Batty has also been a member of the coaching staff at Wayne Hills High School, Don Bosco Prep, and Weequahic High School, capturing state titles at all three schools. From 1999 to 2004 Coach Batty served as the Head Coach and Athletic Director at Marist High School.

Batty’s hiring caps several tumultuous months for Verona football. Lou Racioppe, who had been Verona’s coach for two decades, was placed on administrative leave last October and did not rejoin the team before the 2017 season ended. Verona officials announced in mid-February that they had hired Tony Sorrentino, a former assistant college and NFL coach, to be both the new head football coach and JV lacrosse coach, but Sorrentino abandoned the Verona job after just one month to return to college coaching.

Batty said yesterday that he had applied for the VHS coaching position when it was first posted over the winter, and had been interviewed for it then. He reapplied when he heard of Sorrentino’s departure. He will meet with the 2018 football team on Wednesday, May 2. Batty has not yet met with the Fifth Downers, the football boosters organization. Fifth Downers President Mark Riggio said by text message Tuesday night that “The board welcomes Coach Batty to Verona and wishes him the best of luck.”

In the press release, Verona noted that throughout Batty’s interview process, he shared how his coaching philosophy is rooted in strong moral character with the emphasis on technique and fundamentals. “He believes that both on and off the field, the coaching staff owes all of their players their best every day and that open lines of communication are integral between coaches and players,” the district wrote. “Coach Batty prides himself on preparing young people for life after their scholastic athletic career and is focused on committing himself to his student athletes so they fondly reflect on their time in the program as a positive experience.”

Batty is thrilled to be heading back to his high school field. “It’s an honor and a privilege,” he said.