When Italian Americans Were The Enemy 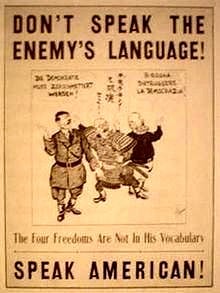 The Verona Public Library will present “No Italian Spoken for the Duration of the War: Italian Americans and the Second World War” by Nancy Carnevale, Ph.D. on Sunday, October 18 at 3 p.m. The Library is located at 17 Gould Street. This program is free and open to the public and is funded by the Horizons Speakers Bureau of the New Jersey Council for the Humanities, a state partner of the National Endowment for the Humanities.

Dr. Carnevale is an associate professor of history at Montclair State University where she teaches the history of immigration, race, and ethnicity in the U.S., Italian American, and women’s history. She is the author of A New Language, A New World: Italian Immigrants in the United States, 1890-1945 (University of Illinois Press, 2009), winner of a 2010 American Book Award, and her articles and essays appear in a number of journals and edited collections. She has twice been a National Endowment for the Humanities Fellow. Her work has also been supported by the Social Science Research Council and the Rockefeller Foundation. She is co-editor of the Critical Studies in Italian America book series from Fordham University Press.