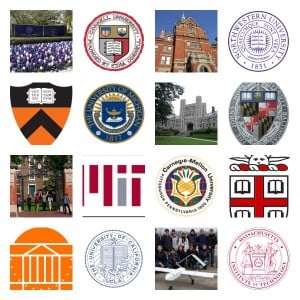 On March 27, many of Verona High School’s top students weren’t in VHS. They were in a bus in Boston, where the high school’s music program had gone for its spring trip. But at 5 p.m. that day, the last thing they were focused on was music. It was deadline time for Ivy Decision Day, the moment at which eight prestigious colleges announced their admissions. The seniors pulled out their smartphones and held their breath.

“When Natalie [Wertz] said she got into Princeton the whole bus started cheering,” says Dan Smillie says of a senior flute player. “It was the same with Dan Li and Brown.” Li, a saxophone player and National Merit Scholarship finalist, was accepted to Brown’s Program in Liberal Medical Education, which will combine his undergraduate degree and med school into a single eight-year package.

Defying the college admissions odds, the Verona High School Class of 2014 has posted an impressive list of acceptances. Its students have been chosen by many of the Ivies (Brown, Columbia, Cornell, Dartmouth, Harvard, Princeton, University of Pennsylvania and Yale) and by top schools across the U.S., including Boston College, Bucknell, Carnegie Melon, George Washington University, Johns Hopkins, Lafayette, Lehigh, MIT, NYU, Northwestern, Rice, Stevens Institute of Technology, UC Santa Barbara, UCLA, University of Michigan, University of Rochester, University of Virginia, University of Washington, Vanderbilt, Virginia Tech and Wake Forest. There have also been acceptances at two top Canadian schools, McGill and the University of Toronto.

How did they do it? Through hard work in school and equally hard work on the college applications. “We have a crazy class of really diverse people,” says Matt Carroll, a trumpet player and runner who is headed to Carnegie Mellon to major in astrophysics. “There are a bunch of us who do well in band and sports. I expected our class to do well in college.”

But the results are impressive given the daunting odds of acceptance at America’s top colleges. There were 253,472 applications nationwide to Ivy League schools this year, but only 22,624 were accepted, an admission rate of 8.9%. It was worse elsewhere: Stanford admitted 2,138 students of the 42,167 who applied, for the lowest rate in its history, 5.07%. Acceptances have gotten so low that students are applying to more schools, which further depresses the rate. According to The New York Times, only 9% of students applied to seven or more colleges in 1990, but that jumped to 29 percent in 2011.

“It’s hard now, you don’t know which ones will like you,” says Wertz, who will major in chemical and biological engineering at Princeton. She was also accepted at Cornell, Northwestern, Vanderbilt, Michigan, and UVA’s Rodman Scholars Program (the top 5% of its engineering acceptances), but rejected at Stanford, Harvard, Yale, Brown, Columbia and UCLA. When she adds in the three schools who wait-listed her, she believes she spent 48 hours on college applications.

Smillie, who will attend Johns Hopkins this fall, was also accepted at Stevens, Bucknell and Lafayette, wait-listed at Carnegie Mellon, Harvard and Yale, and rejected at UPenn, Cornell, MIT and Princeton, but he believes he made the right decision in making his applications. “I feel like there are kids who have said ‘I won’t get in’, so they don’t even try,” he says. “I wouldn’t have been wait-listed or accepted to the schools I got into if I hadn’t tried. The acceptance rate may be only 5% at Stanford this year, but that’s still higher than zero percent if you don’t even apply.”

Smillie and the others say they pushed themselves to take a very demanding schedule at VHS, including advanced placement classes. VHS 2014 was in its freshman year when the Verona Board of Education revised the high school curriculum to direct more students into higher level courses, over the objection of many parents. Last September, Smillie, Wertz, Li, Carroll and fellow senior Chris Sweeney were among 17 students named AP Scholar with Distinction, which is given to students getting an average score of at least 3.5 on all AP exams taken, and scores of 3 or higher on five or more exams.

“AP Computer Science was a turning point in how I envisioned myself,” says Sweeney, who believes computers will be part of whatever he does at MIT. “As a freshman, I was set on going into music,” adds the trumpet player. “Then over sophomore year, I started to lean toward math and my future goal shifted more toward STEM [Science, Technology, Engineering and Math] and engineering.” BOE take note: Sweeney wishes that VHS’ curriculum had included more engineering, particularly hands-on classes in applying physical concepts to building.

Though Sweeney will not be majoring in music, he still credits the VHS music program for some of his success. “Band lets us all collaborate and work together, and the bond we all have helps with school too,” he says. “I think that makes us the high-power students that colleges look for.”

Carroll echoes those sentiments. “Get involved,” he advises underclassmen. “Find something you love, even if it’s not in school. Schools like Princeton, Harvard and Brown look for interesting candidates, even if they are not the smartest in school. Most of my class they all have something they love.”

Adds Smillie, “One of the biggest mistakes people make in high school is that they don’t push themselves enough,” he says. “There’s something called ‘strength of schedule’ in football rankings and the same thing applies for a high school transcript. I tried to take as many hard classes as I could. Everything got better because I tried to go that extra push.”