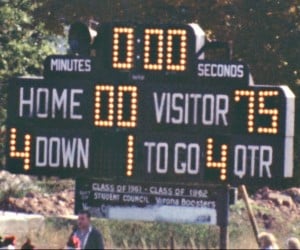 75-0: The Documentary is a movie that was made by two Verona High School graduates about an era in which VHS football had 32 unbroken defeats and the worst loss of them all, a 75-0 pummeling by Madison High School in 1966.

In February, MyVeronaNJ.com told you how the movie came to be made. Now you can see it for yourself at the Verona Community Center on Thursday, May 1, at 8 p.m.

“Young people can look at our movie, as my son did, and say, ‘Why do you still think about that game?'” says producer/director Venanzio “Lou” Cortese, who played on the ill-fated team. “And I tell him that the memories and the friendships we made playing football together, even if we didn’t win, they can last a lifetime.”

The screening is free and no reservations are required. You can see the trailer for 75-0 on YouTube