Going Down The Shore? Hell Yes 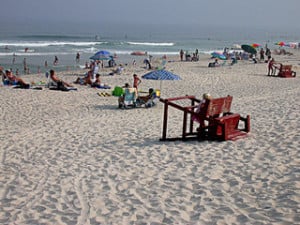 Hurricane Sandy may have taken a large swipe at New Jersey’s beaches and boardwalks, but almost all regular Jersey shore visitors plan on being down the shore this summer, according to a new Rutgers-Eagleton poll.

Sixty-four percent of those surveyed say they will spend about as much time as in summers past, while 13% say they will makelonger stays. But, citing the massive storm, 20% plan shorter visits.

“The summer tourist season seems surprisingly stable, though perhaps down slightly based on current plans,” said David Redlawsk, director of the Rutgers-Eagleton Poll and professor of political science at Rutgers. “While some regulars will cut back due to Sandy, most expect to spend as much or more time than ever enjoying the Jersey shore. Even those cutting back are still more likely to visit than to stay away entirely.”

Photo of Ship Bottom by John Weiss via Flickr.