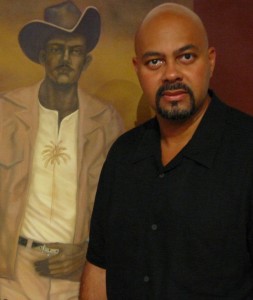 Ernest Hemingway has been dead for more than 50 years, but he continues to inspire creative people the world over–including one in Verona who can almost count the great author as a relative.

Raul Villarreal’s childhood was spent in the shadow of Hemingway in Cuba. His father was the caretaker of Finca Vigia, Hemingway’s estate, and served as Hemingway’s personal assistant. But it was not until years later, after his family emigrated first to Spain and then the United States, that Villarreal came to fully understand the man his father called “Papa”. And to understand that, despite the outward chaos of Hemingway’s life, there was an inner discipline that served his creativity well. “Hemingway devoted six hours a day to his writing,” notes Villarreal, who helped his father Rene Villarreal write a memoir, Hemingway’s Cuban Son, in 2009.

This is the Hemingway that Raul Villarreal sought to capture in the portrait below that he submitted for Persona, an art exhibition at the College of Saint Elizabeth’s Therese A. Maloney Art Gallery that runs through mid-April. Based on the iconic Josuf Karsh photo of the author, it focuses on the left side of Hemingway’s face, where Villarreal says a falling skylight left a welt and possibly a personality-altering concussion.

Growing up surrounded by Hemingway connections–Rene Villeareal has a copy of the Karsh portrait signed by the author–it was perhaps inevitable that Raul Villarreal would be influenced by by him. “Hemingway gave my father good advice about writing,” Villarreal says. “Write about something you know well.” Villarreal has carried that into his work as an artist. “I feel my art is very autobiographical. I am interested in multiculturalism because I live it every day of my life.”

That multiculturalism includes both the Cuban-American community he grew up in, and the Cuba that he and his family have visited many times over the years. “Even in Verona, I have my Cuban connections,” says Villarreal, who moved here seven years ago. He expects to be in Cuba this summer for a conference on Hemingway.

Villarreal worked in graphic design in New York City for 15 years before going back to school for a masters in fine art. He now teaches at Saint Elizabeth College and New Jersey City University in Jersey City, among other places. “I find that being creative is needed in any business,” says Villarreal. “The students I teach may be majoring in other things, but they take art to stimulate the creative side of their brain.”

Persona, a gallery show featuring Villareal and 31 other artists from across the country, will be on view at the Maloney Gallery in Morristown until April 14. The gallery is open Tuesday, Wednesday, Thursday and Sunday, from 2 to 6 p.m., and by appointment by contacting Virginia Fabbri Butera, its director, by e-mail or 973-290-4314. Villareal will also be donating copies of his book, “Hemingway’s Cuban Son”, to the Verona Public Library.