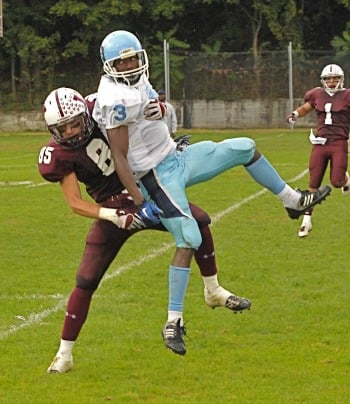 If you’re into verbal puns, you might find it amusing that one of the strongest starters for the Verona Hillbillies this season is a multi-faceted player whose last name translates as “from the valley”. Alex Dellavalle is this week’s Verona Sports Boosters Senior Athlete of the Week.

Dellavalle is a co-captain and two-year starter. He plays wide receiver on offense and cornerback on defense, where he has 16 tackles on the season, for of which came in the team’s most recent game against Weequahic High School.

Though Verona had a defeat in that game, Dellavalle caught three passes for 42 yards on the day, got an extra point on a pass and scored a touchdown on a nine-yard pass from Frank Ferrari in the fourth quarter. It was Dellavalle’s second TD of the season.

On the field and off, Dellavalle commands the respect of his peers, and he has shown his leadership in the weight room where he has almost perfect attendance.