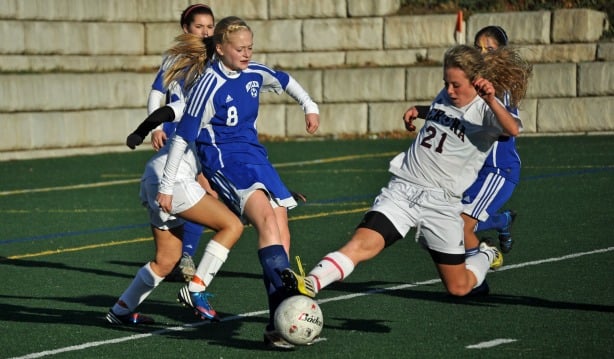 After a scoreless and hard-fought first half, Verona’s girls soccer team got the only goal it needed from senior forward Olivia Marino in the second half. The Hillbillies rode that late goal, and outstanding defense, to a 1-0 victory over a strong girls team from Butler High School in the first round of the NJSIAA Group 1, Section 1 playoffs.

The victory at Centennial Field on Tuesday afternoon moves No. 7 seed Verona (11-5-1) into the second round, where the girls will take on second-seeded Waldwick in the quarterfinal round.

A great defensive play by senior Julia Frazee led to the scoring play by Marino. Frazee got the ball to sophomore Claire Fitzpatrick and senior Tina Flores to set up Marino for the game-winner. Against a Butler team with talented players in key positions, Verona was able to control the action for much of the game, but could not convert its scoring opportunities.

For Verona, freshman goalie Diana Flores made 10 saves, while Marlene Arabia of Butler (8-11) turned away 10 shots by the Hillbillies. It was the team’s ninth shutout of the season (eight with Flores in goal).