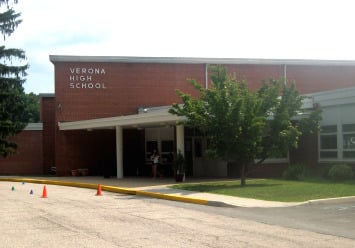 Four Verona High School students had to be taken to a Hoboken hospital on Friday night for excessive alcohol consumption during the Hillbillies’ football game, conduct that could put them in violation of Verona’s so-called 24/7 policy.

According to the Hoboken Police report, three students at the JFK stadium game were discovered to be “highly intoxicated” at 8:22 p.m. They were transported by ambulance to Hoboken University Medical Center. Shortly after, a fourth student was brought to the hospital by Verona High School personnel. According to the report, VHS Athletic Director Gary Farishian was at the hospital and contacted the parents of the students. Their names were redacted from the report because they are minors, but they appeared, by their year of birth, to be juniors and seniors.

Hoboken police said the students were not given a breathalyzer test because their medical condition needed to be handled first. The students were treated and released to their parents shortly before midnight.

Under Verona  Board of Education Policy No. 5131.6, VHS students can face consequences for using drugs or alcohol on and off school property at all times. They can be excluded from co- curricular activities for up to seven days without review or appeal and excluded from competitions or performance for 15 days. Depending on the nature and severity of the offense, students can be suspended for a minimum of five days and face a hearing in front of the Board of Education. First-time offenders can be required to meet with a student counselor, and student leaders or team captains may need to forfeit their honors.

For now, the BOE is not saying what, if anything, will happen to the  students who were found to be intoxicated at the Hoboken game. Superintendent Steven A. Forte e-mailed this statement Tuesday afternoon: “An incident occurred at the Hoboken vs. Verona Football game on Friday evening. The matter is a confidential student matter.”

In July, a New Jersey appellate court struck down a Bergen County school policy that tried to impose a wide-ranging code of conduct on students. The action in the so-called Ramapo Indian Hills case seemed, at the time, to undermine many aspects of Verona’s 24/7 policy. Like Verona, the Ramapo Indian Hill school district had sought to apply its conduct rule on school grounds, but also off school property and after school at all times.

The appellate court decision did not completely bar school boards from acting when student behavior results in a police report, as happened in the Hoboken incident. While the court held that state laws don’t grant boards of education “unlimited power” to discipline students, they can act where “there is a close nexus between the misconduct and the school.”

When the appellate court decision came out, BOE President John Quattrocchi said that the board  would be taking another will look at its policy. “This ruling does makes clear that school boards cannot take the role of parents or law-enforcement to act solely to discipline students–unless the incident affects the health, safety or well-being of that or other students,” he said in July. So far, no changes to the 24/7 policy have been announced.

Previous article
Veronans Get Paper Mill Callbacks
Next article
Crock It! Back To School