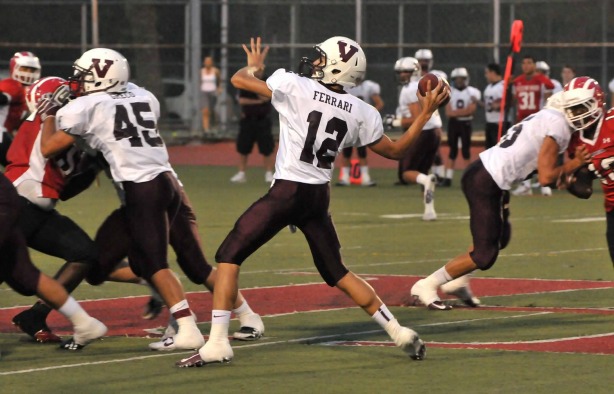 The Hillbillies pulled out a thrilling 16-13 victory in their season opener at Hoboken’s JKF Stadium on Friday night.

In the opening moments of the game, the Red Wings struck first when they caught the ‘billies off guard with a 55-yard touchdown pass right down the middle to put them ahead 6-0. The successful extra point made it 7-0. On the ensuing kick-off, senior Captain Michael Harrington followed his teammates’ wedge led by key blocks from junior Matt McKeown and senior Captain Alex Dellavalle and raced 80 yards for a touchdown that put Verona within in one. Alex Kaslander’s successful point after attempt knotted the score at seven apiece.

On a beautiful night for football for it looked as if both teams were ready to put a lot of points on the scoreboard. However, Verona continually pushed the ball in Hoboken’s “Red Zone” (within the 20-yard line) but they just couldn’t score due to a series of fumbles and dropped passes, and Hoboken just couldn’t get their running game going against the Hillbilly defense.

The Red Wings had an opportunity to pull ahead at the start of the second quarter but the Hillbillies’ exciting goal stand on the three yard line turned them back. Hoboken ran right but was stopped by seniors Dean DeNicola, Ryan Flood and Harrington. Next up the middle the where they were turned back by senior Captain Luke Sniatkowski, Luke Weiss and Flood and senior Captain Frank Grecco along with Quinn Cummings and McKeown stopped the Red Wings on their final attempt turning the ball over on downs. As the first half came to a close, the Red Wings scored on a 65-yard strike down the middle to go ahead 13-7. 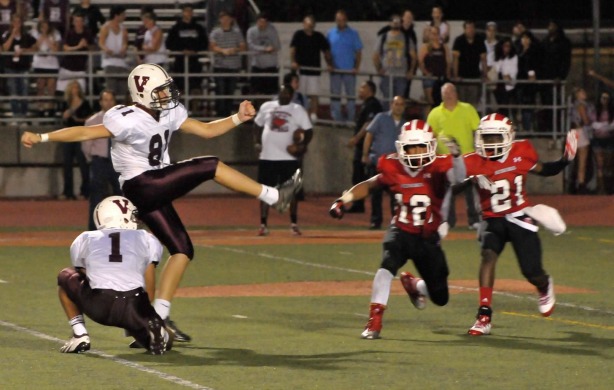 The game turned for the Hillbillies when they marched down the field in the fourth quarter to Hoboken’s two yard line. After a failed attempt to score, sophomore Frank Ferrari squeaked by Flood’s block for a QB sneak to tie the game at 13-13. Kaslander’s extra point was blocked.

The Verona defense stopped the Red Wings on the next two series, giving them one last chance to get the ball back or be forced into overtime. Running backs Greco and McKeown, both of whom had 70 yards on the night, helped pound the ball down to the Red Wings’ 12 yard line. With time running out, Ferrari hit Harrington for a nine-yard gain, giving the Hillbillies a chance to go ahead.

Verona Coach Lou Racioppe called timeout and had his team line up for a Kaslander field goal. The Red Wings, with timeouts left, used them to “ice” Kaslander in order to break the Hillbillies’ momentum. But with just four seconds left, the junior stuck the ball right between the uprights to give the Hillbillies a huge upset road victory. 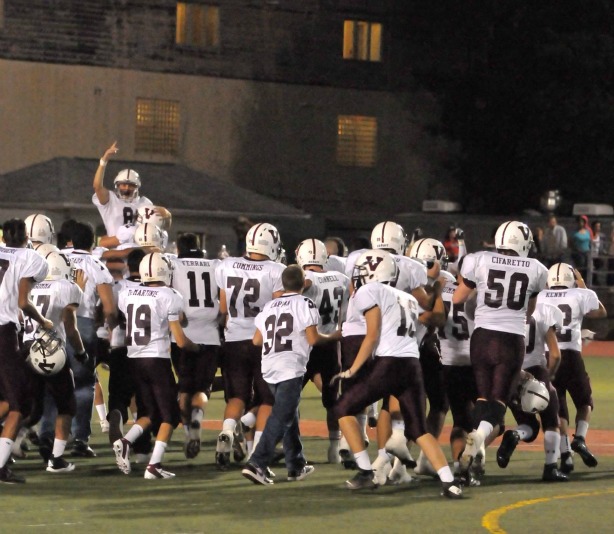