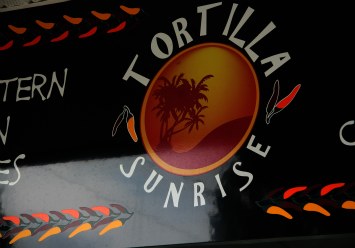 As we reported last month, Tortilla Sunrise is under new ownership. John Orr, who has a bachelor’s degree in restaurant management, is not new to either the restaurant or the food business. He is owner of the Bonfire Pepper Company and has been making and bottling his own hot pepper sauce for almost a year. Orr first met the Meryl and Steve Connelly, the founders of Tortilla Sunrise, when he was a teenager and used to visit his mother at work in Caldwell after school. The Laughing Burrito–the Connelly’s firs restaurant–was right next door and Orr spent countless hours in there. When he approached Steve Connelly about buying Tortilla Sunrise, it was a perfect fit. Orr says he has “always loved the atmosphere Steve created and that [Tortilla Sunrise] is a close-knit local place.”

While Orr has made some minor adjustments to the menu, he plans to keep most of it the same. Some ideas he is considering are creating a secondary, fusion-inspired menu as well as a breakfast menu. And while the original atmosphere was a draw for Orr, he has added a little polish to the storefront to give it a “facelift.”  For a night-time change of pace, Orr is planning a tasting event on October 13. He will be featuring three new hot pepper sauces from his Bonfire Hot Pepper company. The sauces will be accompanied by free samples of chicken or rice and beans from the Tortilla Sunrise menu. When it comes to his hot pepper sauces, Orr’s favorites are Banana Mango and Scotch Bonnet, which sound so intriguing that curiosity alone may draw me there.

Excellent food and excellent service are the best ways to spread the word about a restaurant, and beyond that, there is the Internet. Given his fluent understanding of technology, Orr has included social networking sites as part of his marketing plan. There are weekly specials on Facebook  and almost daily updates (including specials) on Twitter.   In the near future as he builds staff and strives to further meet the needs of the community, Orr plans to add hours to the store and join more online food ordering and delivery groups such as: campusfoods.com, delivery.com, and grubhub.com.