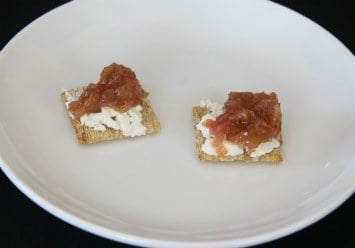 Once I became comfortable in the jam/jelly/compote space, I really started having some fun and part of that included exploring other people’s Web sites, recipes and ideas. A chef friend of mine told me he believes that with any kind of cooking, once you learn the basics, the rest of it follows along pretty easily. He was right. When I stumbled upon this recipe, I was excited to try it. I’ve always wanted to cook with rhubarb, but then realized I totally missed the rhubarb window. Rhubarb is a spring fruit and as far as I can tell has a fairly short window of harvesting. However, as Brook Hurst Stephens points out on her Learn to Preserve Web site, when one has a lot of rhubarb, canning seems like a good option and pairing it with citrus even better. I’ll have to start earlier next year.

When I prepared to make this, I also happened to have a lot of ginger root and was looking for something to do with that as well. I figured that ginger and grapefruit would go well together, but I wasn’t sure about how well it would pair up with rhubarb. The last time I had tasted rhubarb was in Switzerland in 1993. It had been baked into a rhubarb crisp and served with creme fraiche. It was one of the best desserts I’ve ever had.  In the spirit of “having fun in my kitchen” I decided to go for it. At the time though, only frozen rhubarb was available, another wild card in my experiment. I’m happy to say that in the end, of the three jelly experiments during some rainy days at the end of August, this was my favorite, and I mean eat right out of the jar favorite.

(adapted from the original recipe by Brook Hurst Stephens)

If you have not done so already, I would encourage you to visit the Learn to Preserve site for this recipe. The photos are beautiful!

What I like about this recipe is that using frozen rhubarb worked well. Also, citrus season is approaching so buying a fresh grapefruit will be easy. Ginger root is available year round, so basically, you can make this at any time of year. I think it would smell great in the middle of winter cooking in the kitchen.

I also like that it does not involve using pectin. The boiling of the sugar in the mixture thickens it, so if you are nervous about using pectin (as I was the first time) this is a great recipe to start off with.

The recipe as prepared here yielded two 8oz. jars. This is so good that the next time I make it (and there will be a next time) I will double the recipe.