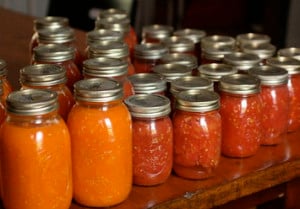 A few days ago I got the phone call I’ve been waiting for. The tomatoes were in! Not the beefsteaks that New Jersey is famous for, but plum tomatoes. Growing up, my parents would spend hours every Labor Day weekend canning tomatoes and bread and butter pickles. I don’t remember watching them do this, I’m sure we were ushered outside where it was safe, but I always heard about it and remember seeing dozens of jars of tomatoes on the table cooling at the end of the day.

For several years, I avoided canning my own tomatoes, pickles or anything else. The kitchen gets pretty hot and it can be dangerous with children underfoot. Last year I was ready to try on my own, during nap time, which was safe and worked well. This year, I managed to squeeze most of my tomato work into an afternoon when all three kids were able to play together and stay out of a potentially hot and dangerous kitchen.  The beauty of canning  is that you have fresh vegetables all winter long and when making things like pickles or jelly, they make great gifts.

The basics of canning are pretty simple. You make and cook a food, pour it into a jar, take those jars and put them in a hot water bath for a certain amount of time, remove the jars to cool, and you’re done. I’ve made tomatoes, applesauce, mint jelly and hot pepper jelly. There are several Web sites with canning recipes and instructions, but the best probably belongs to Ball, the company that is famous for making the mason jars in which the food is preserved.

Start by watching the tutorial on this page, which takes you through the steps of canning high-acid foods like tomatoes. It is possible to can low-acid foods, but you need more time, energy and gear. One wrong move and you’ve got the potential for botulism. Not something I’m going to mess with now. 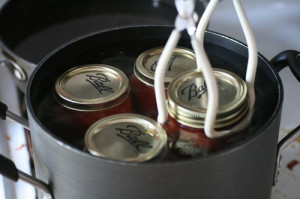 There is a bit of gear involved in canning, and if you’re a newbie, it’s probably best to get one of the specialty pot and rack kits. Ace Hardware in Caldwell has them, as well as some of the supermarkets around here. I use one of my mother’s extra pots and racks that have been around for years and given us many a jar of tomatoes. She probably got it at Saunders Hardware in Montclair; Virginia got her Back To Basics Steam canner from Amazon. The ShopRites in Bloomfield and Little Falls usually have stacks of canning jars in all sizes at this time of year. At $8-$12 dollars for a case of 12, they can seem expensive until you realize that you will re-use the jars for years. Only the lids need to be replaced yearly.

That’s it. I’m going to give you my tips on making applesauce and tomatoes in separate posts. We’re working on stories for jams, jellies and pickles as well. Click on the Preserve It tag and bookmark it to make sure you don’t miss anything. And if you have a family recipe you’d like to share, please send it to us. I still remember my mother’s writing on the bread and butter pickle recipe, and there is nothing as good as those pickles on a burger or with a grilled cheese!