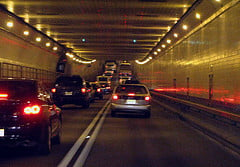 Last Friday, the Port Authority of New York & New Jersey unveiled a plan that could raise your cost at the Hudson River bridges and tunnels to $14 from $8 one way beginning next month. PATH train fares would jump to $2.75 from $1.75, also starting in September. The Port Authority says the massive toll and fare hikes are needed to fund capital improvements that will create 167,000 jobs.

But NJ Spotlight, an independent news analysis site, isn’t so sure the plan adds up. It notes that the increase amounts to $1,000 in extra costs per family per year and that much of the Port Authority’s financial troubles stem not from the recession but from the rising costs of the World Trade Center redevelopment project:

“…Over the years, steel prices and construction costs rose steadily from the original estimates. The cost of the Vehicle Safety Center rose from $478 million to $633 million. Last February, the cost of the winged hub PATH Station at the World Trade Center site jumped another $180 million to $3.44 billion, partly because of the need to use reinforced steel in the station for security purposes. (Overall, the Port Authority estimates that its security costs have jumped from a projected $2 billion to a total of $6 billion.)

The 408-foot spire added to 1 World Trade Center to bring the building to exactly 1,776 feet high added significantly to the cost. Under pressure from politicians and family members of victims, the Port Authority authorized an additional $75 million in construction costs for work changes that will ensure that the 9/11 Memorial will be open in time for the tenth anniversary observance at Ground Zero next month. Because the 9/11 Memorial will rest on the roof of a planned transportation hub that has not yet been completed, the Port Authority changed its plans to build the roof and deck first, then finish the rest of the transportation hub later. The Port Authority and the customers who support its operations have to worry not only about construction overruns, but also the future rental market.

Gov. Chris Christie has blasted the plan, but indicated he could settle for a 25% toll increase–or $10 from your wallet per trip. If that doesn’t sit well with you, you’ve only got a few days to let your thoughts on the hike be known: Public hearings will be held on August 16 and the Port Authority board will vote on August 19. Use this contact form to send the governor your thoughts.