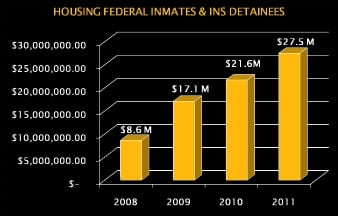 Maybe crime does pay after all.

When Essex County Executive Joseph N. DiVincenzo Jr. unveiled the 2011 county budget yesterday, he took pains to highlight the county’s most important revenue generator right now: our jail. Revenue raised by housing immigration detainees and federal prisoners at the Essex County Correctional Facility will jump to a projected $27.5 million in 2011 from $8.6 million in the jail’s first year of operation, 2008. And it was perhaps a touch of irony that the presentation of the budget–a balanced, $762 million behemoth–took place in a building that was once a jail.

The extra income from the correctional facility was crucial to closing the $56 million gap that Essex County faced this year, since revenue from other sources has plummeted during the recession. DiVincenzo noted that interest on investments has plummeted from $4.1 million for 2007 to a projected $175,000 for 2011. Real estate income will be just $7.3 million this year, down from $14.5 million in 2007. The county is anticipating $1.7 million in revenue and savings by bringing more tenants into the LeRoy F. Smith Jr. Public Safety Building, the former jail at 60 Market Street in downtown Newark.

The county is also projecting higher revenue from its parks facilities: about $9.5 million in
2011, up from $6.5 million for 2007, thanks to the changes made at Turtle Back Zoo and other venues. 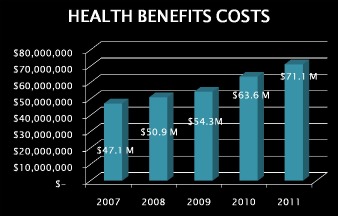 But DiVincenzo also noted that, if Essex County is going to keep its budget costs in line in the future, it is going to need some serious help from Trenton. He reiterated his November call for state legislative changes that would make it possible to charge county employees more for their healthcare coverage. County workers now pay only 1.5% of their salary for their health benefits, or about $4 million. But the county’s health benefits costs will soar to $71.1 million in 2011 from $47.1 million in 2007, despite the fact that the county has pared its workforce to fewer than 3,500 from 4,200 when DiVincenzo took office. The county executive also wants Trenton to require county employees to pay more for their pension costs and to put in more years before retirement.

DiVincenzo indicated his next goal is to raise the bond rating of Essex County, which was junk when he took office, from AA3 to AAA. “We have to continue to run this county as a business,” he said. “We have to bring in revenues. But things are going very well here in Essex County.”

The budget now goes to county freeholders for approval.