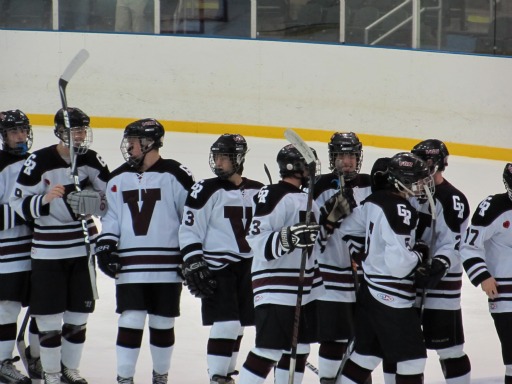 Senior and Co-captain Nick Martell had four goals in this game as did Junior Matt Lander, who also tacked on an assist. Junior Max Linnett had the other two goals for VGR. All three goal scorers are from Glen Ridge.

VGR goaltender Matt Brehne of Verona had an outstanding night; only letting in three of MKA’s 31 shots on goal. Alex Morse had two goals for MKA and Brendan Pepe had the other.

Glen Ridge Co-captain Alekos Polis had five assists on the night. Co-captain Joe Fitzmaurice and Freshman Dylan DeCandia of Verona each had an assist.

The only area where MKA overshadowed VGR was the shot count, with 31 over VGR’s 27. This was the first of two games between these two teams this season.

VGR’s next game is tonight at 7:45 against West Essex at Codey Arena.