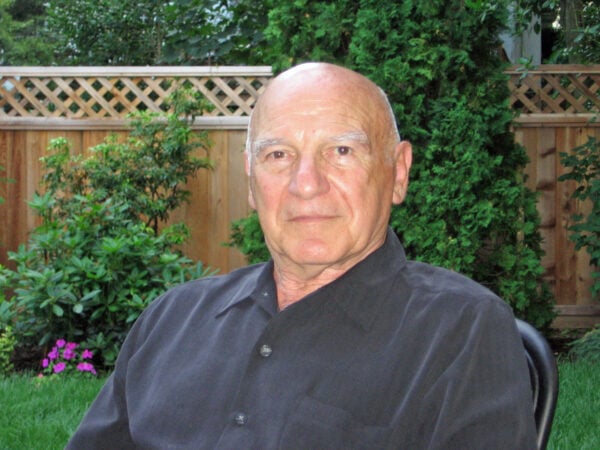 Colonel Vincent A. Di Mauro (USAF ret.) of Verona died on Sept. 19 at Clara Maass Medical Center in Belleville surrounded by members of his extended family. He was 94.

A celebration of his life will take place at the Verona Community Center, 880 Bloomfield Avenue, Verona on Friday, October 7, from 6 to 9 p.m. Services will be held at the Episcopal Church of the Holy Spirit, 36 Gould Street, Verona, on Saturday, October 8, at 10 a.m.

Vince was born on January 31, 1928, to Frank Paul Di Mauro, a first-generation immigrant from Italy, and Carmela Sorrentino Di Mauro, a native of Brooklyn. He grew up in Newark and was a graduate of Hillside High School and Rutgers University, and later received his masters in public administration from George Washington University. He had a long and distinguished career in the U.S. Air Force, rising to the rank of colonel.

Vince flew 80 combat missions during the Korean War for the USAF’s 7th Fighter Squadron. He flew missions during the Cuban Missile Crisis in 1962, and was stationed in Thailand during the Vietnam War. He was involved in the famous Son Tay Raid that attempted to free American POWs late in the Vietnam War, and then served as deputy commander of the Joint Casualty Resolutions Center, the Air Force unit tasked with recovering the remains of U.S. airmen shot down during that war. He also served five years in the Pentagon as a special assistant to the Secretary of Defense, a posting that resulted in his inexplicable decision to become a lifelong Washington Redskins fan.

Over the course of his military career, Vince received numerous decorations for gallantry, including the Distinguished Flying Cross for a mission in which he destroyed a North Korean bridge. He was leading a group of F-84 fighter-bombers on an overcast day, and no one could find the target. Vince’s task was to suppress anti-aircraft fire around the heavily defended objective, but as luck would have it a hole opened up in the clouds right beneath his plane. Vince checked his map and knew he had found the bridge. His call sign was “Bunyap,” and he radioed, “Bunyap is going to hit the target,” which he did, flying through enemy fire and destroying the bridge. “Sometimes greatness is partly due to luck,” he remarked.

At one time or another, Vince flew nearly every type of aircraft used by the USAF between the early ‘50s and late ‘70s, from pioneering fighter-bombers like the F-84 Thunderjet and F-86 Sabre to F-4 Phantoms, F-105 Thunderchiefs and B-52 Stratofortresses.

Vince’s final assignment in the Air Force was serving as commander of Sheppard Air Force Base in Wichita Falls, Texas, the largest training base in the USAF. He ran the base from 1977 to 1979. This week a flag was raised at Sheppard AFB in his honor.

After leaving the Air Force, Vince became town administrator for the Township of Verona in August 1979, a post he would hold for more than 15 years before serving as Essex County administrator from 1995 to 2001 to finish out his career.

While these were the factual details of Vince’s life, they do not provide a true measure of the man. “I challenge you to find a more idyllic life than mine,” he said. “Most of that is due to my family.”

To his family, he was the go-to person for almost everything. He built houses, both full-sized and miniature. He built gazebos, pergolas, decks, mantle pieces and stone walls. He laid tile, pounded nails, hung mirrors, shelves, and lighting. He once put together an entire swing set for his grandchildren in 2 hours and 55 minutes after being told that that he could not beat the existing 3-hour record. He repaired a set of creaky stairs for one of his children, which had the unintended consequence of allowing his teenage grandchildren to sneak out at night undetected, and once repaired a leaky oil tank using the tongue from an old sneaker. He also nearly cut off his own finger with a table saw, after which he drove himself to the emergency room to get it bandaged. Surprisingly, he never owned any type of casual work clothes and did all these projects wearing loafers and a nice shirt and slacks, always in some variation of the color taupe.

Vince built cradles for the newest family members and sat by the bedsides of the departing ones. He escorted some relatives down the aisle to be married and helped navigate a few walks in the other direction when things did not work out as expected. He removed wiggly teeth, stitches, casts from broken limbs, and fishhooks. He taught various children and grandchildren how to drive a car, a boat, a motorcycle, and how to make a pizza from scratch. He was an exceptional cook, and several of his signature dishes became requested birthday gifts in lieu of traditional presents. For him, every day started with the same question: What shall we make for dinner? He learned how to make his own wine and had one of his children design a label for his signature brand. At the time of his death, Vince had been working on a novel, which one can only assume was going to be written in the style of his favorite author, Louis L’Amour.

Vince would travel any distance to attend the schools, sports events, plays, concerts, graduations and weddings of his family members. He “helped” with countless homework assignments, including the construction of a wooden rocking chair that activated a wooden butter churn, while never allowing the actual student to get anywhere near the project. Understandably, he was his grandchildren’s babysitter of choice on numerous occasions, one of which was a weekend spent teaching his much-too-young grandson how to drive a car, shoot a bb gun and get dragged on a tube off the back of his boat.

Vince was either a coveted teammate or worthy opponent when playing chess, tennis, or golf, in swing-jumping competitions, and in some raucous multi-generational games of stickball. On a trip to the Canadian Rockies, he jumped out of a car to photograph a bear and then broke the Canadian land-speed record running back to the car after he succeeded in getting not only the photo but the bear’s attention as well, all while his grandchildren screamed in terror from the backseat.

For those who knew him, Vince remained a bit of a fighter pilot for his entire life, even if just driving a car. He had a theory that if you drove fast enough, you minimized your time on the road and therefore limited your exposure to accidents, which apparently is not a theory endorsed by the New Jersey State Police. He once was driving with his adult daughter when he was stopped for speeding. As the officer drove away, Vince, every bit the former military man, sat up straight, squared his shoulders, turned to his daughter and said, “I would really appreciate it if you did not tell your mother about this.”

His family will remember him as a dignified man, as exemplified by the time the Verona Police were called to his house after someone reported fireworks being set off – he was the one setting them off – at which point Vince and his son-in-law ran like little kids into the woods to avoid being caught. The poor police officer had to yell to him that it would not take much police work to know who it was hiding in the woods since, as the current Verona town administrator, Vince was quite well known in town.

He lived through a Great Depression, 17 presidents, and half a dozen major American wars. Throughout his life, he felt a bond with the poet and Air Force pilot John Gillespie Magee, Jr., who penned these lines in the well-known sonnet “High Flight” only months before his own death: “Oh! I have slipped the surly bonds of Earth/and danced the skies on laughter-silvered wings.”

Condolences can be left at www.proutfuneralhome.com