Summer Sundays aren’t so sweltering at Holy Spirit any more. Thanks to some new technology and one of Verona’s largest solar panel installations, the Episcopal church near the center of town is keeping parishioners and visitors cool—and church finances on budget.

Holy Spirit faced the same challenges as many of Verona’s houses of worship. It has a large building created before the advent of modern heating and cooling systems. A house of worship isn’t in use all the time, so it doesn’t need air conditioning on 24/7 like a Verona home: The sanctuary needs to be cooled or heated for a few hours on weekends, and not at all during the week. As an Episcopal Church, Holy Spirit has also pledged to slow climate change, locally and globally, so it has been trying to limit its use of fossil fuels.

To meet these challenges, Holy Spirit embraced a technology that is still relatively uncommon in Verona: heat pumps. And to power them, it embraced an Episcopal Diocese of Newark initiative to put solar panels on church roofs.

Unlike a traditional furnace or boiler, heat pumps don’t generate heat. As their name implies, heat pumps move hot air from where it isn’t wanted–like inside a church sanctuary in August–to outside the building. In other seasons, heat pumps can operate in reverse, bringing outside air in to warm the interior. Heat pumps can be connected to ductwork or installed in a ductless configuration, which is also known as a mini-split.

Holy Spirit had Harmony Heating of Rockaway, N.J. install four, three-ton ductless heat pumps in its sanctuary last year. Harmony’s design consultant, Andrew Durborow, is a Verona resident, and Holy Spirit’s rector, Father Jerry Racioppi, had gotten to know him through the Verona chapter of the Italian-American service organization UNICO. Heat pumps were once only considered a solution for warmer climates but improvements have made them an option for colder areas too. “Heat pumps have come a long way in recent years,” says Durborow. The four mini-splits, plus four outside condensers and an electrical panel upgrade, cost Holy Spirit $38,000, which it funded through parishioner donations and a “Be Cool” jazz concert.

Verona homeowners who want to follow Holy Spirit’s lead won’t have to pass the offering basket. The Inflation Reduction Act that the U.S. Senate could approve today contains $4.28 billion in funding for homeowner rebates for heat pumps and other energy-saving devices. The rebate could be as much as $8,000 per household. 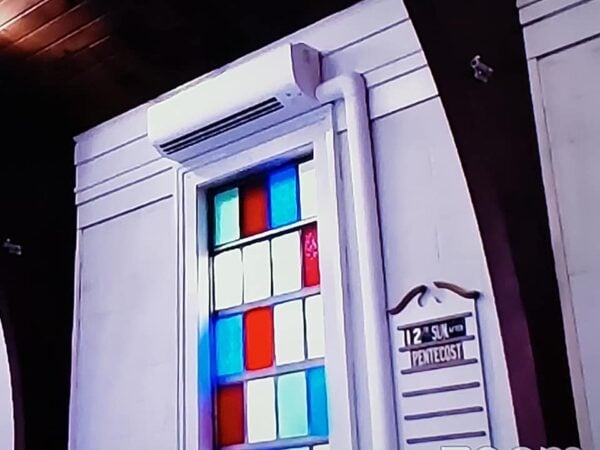 Heat pumps run on electricity, not fossil fuels, and Holy Spirit will now have its own endless source of electricity–a 28.1 kilowatt solar array spread across its east- and south-facing roofs. The Episcopal Diocese chose Holy Spirit to be one of 20 congregations that would get a special loan to re-roof church buildings and install solar panels.

“It was great timing,” says Holy Spirit parishioner Christine Liaukus, a Verona architect who focuses on sustainability and who helped the church to install energy-efficient lighting in 2017. “Our roof needed to be replaced.” The roof and solar panels were put on by the Diocese’s contractor, Azimuth Renewable Energy out of south Jersey, but Father Jerry says that Kevin Toscano, a roofer who is also a Holy Spirit parishioner, gave the church “guidance, suggestions and advice along the way.”

The diocesan loan meant that Holy Spirit doesn’t immediately need to bear the full cost of the new roof–$45,100–or the solar installation, which was another $77,275. The solar array was done as a power purchase agreement, which means that a third-party developer owns and operates the system, while Holy Spirit gets to buy the power generated for a long-term, set price that is generally below the cost of power from an electric utility. And while PSE&G is getting more of its power from renewable sources, Holy Spirit’s electricity is now 100% clean.

Liaukus, who sharply reduced the energy needs of her own Verona house and a 146-apartment complex in Brooklyn, couldn’t do everything she did on those projects at Holy Spirit. There was no space between the church’s rafters and its roof for insulation, nor was there room in the walls, which are cinderblock. But she’s proud of the work that was accomplished and hopes it will inspire more energy efficiency in Verona.

“We’re in a location that hopefully a lot of people will see,” she says.