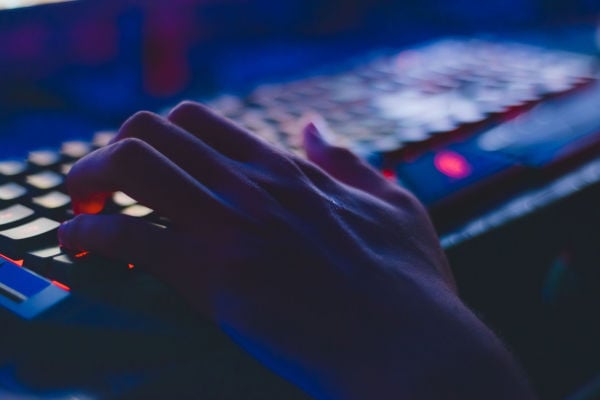 You won’t find Verona High School’s newest team playing on the upper field. Or the lower field. Or the tennis courts, HBW field or Centennial. That’s because VHS’ newest team competes in one of the fastest growing youth sports: online gaming, also known as esports.

The VHS Overwatch team grew out of the VHS Gaming Club, which was formed in early 2020 just before the high school was forced to go remote by COVID-19. Both operate under the watchful eye of physics teacher Alexander Cali, who built their Discord server, the platform that students use for gaming and conversations about gaming. The students played remotely during the height of the pandemic, but are now able to gather in-person at lunch time and even compete at other schools. VHS Overwatch, named for the game it plays, traveled to West Essex High School at the end of February and beat the Knights’ e-sports team, raising VHS’ record for the season to 5-3. (You can follow the team on Instagram at gaming_VHS)

Esports has become a big deal worldwide and it is growing fast: A $1 billion industry at the start of the pandemic, online gaming is expected to hit $3.5 billion by 2027. When the world isn’t locked down, there are big-money tournaments in big arenas. There are high school leagues for esports (VHS and many schools in our area compete in Garden State Esports, which is part of NASEF, the North America Scholastic Esports Federation) and there are even esports scholarships at some colleges. Esports will also be part of the 2024 Summer Olympics in Paris.

For now, though, Verona’s players are in it for the gaming. There are six members of the Overwatch team—Anders Heyniger, Noah Boone, Jeremy Williams, Josh Hayes, and co-captains Aidan Azarowicz and Luca Tedesco—and the gaming club welcomes an ever-shifting group of players and fans. The club hosts Super Smash Brothers Ultimate tournaments during lunch. One student brings in their Nintendo Switch game console, hooks it up to Cali’s projector, and they play on the classroom whiteboard. Some students play the game at hand, and some play games on their own computers. “It’s pretty entertaining to watch,” says Ian Zalewski, who is part of the club but not the team. “Everybody’s really friendly to each other and really accepting. We get quite a lot of new people and everyone is just like, ‘come on in and try this—it’s just a great club’.”

A esports match has an offense and a defense, just like any other VHS sport, and players often shift between the two. A game is played best of three rounds, with each round lasting 10 to 15 minutes. And while gaming isn’t as physically demanding as some of the other activities that Overwatch members compete in at VHS (Boone plays hockey, and Azarowicz and Tedesco are in marching band), the gamers say the need for teamwork and team communication is just as high as they coordinate strategies to take other teams down in real time. Tedesco says that when VHS was behind at one match, he communicated a new strategy to Azarowicz. “When he said he was ready, I used it on them and we swept the entire team and took the point,” Tedesco says.

While some VHS teams get support from the Board of Education and others are supported by parents and community fundraisers, so far, both the gaming club and the team have been using gaming gear contributed by the players. “We do have materials coming,” says Cali, “so that we can say, this is our spot in the building and this is where we can practice every day after school.” And as more gaming happens in person, there could be more need to travel to competition venues like Caldwell University’s gaming arena or the massive Rutgers Esports Center in Piscataway. Caldwell now offers a bachelor of science degree in esports management.

“The goal of all of this is really to put esports on the same level as all the other sports at the school,” says Azarowicz. “We’re doing something that we enjoy right now, but just like with all the other sports, you can build something out of it. The computers, the social media presence, is a way to establish it for the next generation of students.”