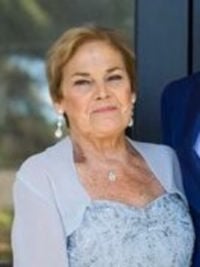 Mrs. Marie V. Traverso, 68, died peacefully on March 2, 2022 in West Caldwell, surrounded by her loving family. Marie, truly the salt of the earth and the center of her family, will always be remembered for her generosity, kindness and unfailing love for her friends and family.

Visiting will be in the Prout Funeral Home, 370 Bloomfield Avenue, Verona on Sunday, March 6 from 3 to 6 p.m. A funeral mass will be offered in Our Lady of the Lake Church, Lakeside Avenue, Verona on Monday at 10 a.m.

Marie, the daughter of Albert and Veronica (Beards) Mercier was born and raised in Jersey City. She graduated from St. Aloysius High School and earned a bachelor’s degree from St. Peter’s University, where she was a member of the swimming, cheerleading and basketball teams.

Marie was a dedicated teacher in the Jersey City school system for many years, most of them at PS 27 on North Street. She retired in 2012.

Marie and her husband, Rob Traverso, whom she married on May 29, 1983, moved from Clifton to Verona in 1986 where they raised their two sons, Robert and William and joined Our Lady of the Lake Parish. They were joined later by Marie’s mother, whom she took care of for many years before her death.

Marie loved children so she never turned down a request to babysit, especially if it included trips to the Verona pool, ballgames or picking up little ones after school.

If a hungry nephew or cousin dropped in to see Marie she was always ready with lunch or dinner. No one who asked Marie for help ever got “no” for an answer. She loved to talk but was also known as a good listener who never spoke poorly of anyone, but always had a kind word for everyone.

She could always be found cheering for William at Verona High School baseball games and Robert at football and baseball games and wrestling matches at Seton Hall Prep. She also loved swimming at the Verona Pool and her frequent days out with “the girls.” Above all, Marie cherished her time with her beloved grandson, Lincoln.

Marie was predeceased by her parents, her brother, Richard Mercier and her sister, Geraldine Mercier.

She is survived by her beloved husband, Robert J. Traverso; by her loving sons, Robert J. Traverso, his wife Natalie, and William A. Traverso; and her precious grandson, Lincoln H. Traverso. She is also survived by her siblings, Kathy McGovern and her husband, Jim, Timothy Mercier and his wife, Cathy, Robert Mercier and his wife, Regina and several nieces and nephews.

Condolences may be left at www.proutfuneralhome.com