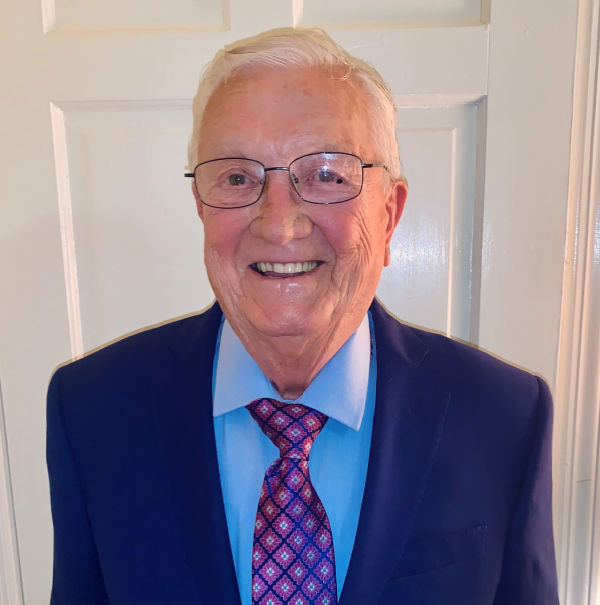 Lenardo George Savino, 91, of Essex Fells, New Jersey, entered into eternal peace on March 1, 2022 surrounded by his family. Lenny, to his friends and family, was born June 6, 1930, in Newark as one of four children to Frank and Antoinette Savino. Lenny grew up in the Greenville section of Jersey City and was a member of St. Paul’s Church.

During Lenny’s early youth, he worked at Grossinger’s Resort in Liberty, N.Y. While working as a cook, his love of sports and music began to thrive. Lenny loved to recall stories of how a kid from Jersey City brushed elbows with some of the best athletes and singers of his era including Jake La Motta, Rocky Marciano, Bob Cousy, Eddie Fisher, Jerry Lewis, and Dean Martin.

In 1953, lighting struck, and Lenny met Marie Theresa Racaniello (“Mary”) on a blind double date in Jersey City. Mary was quickly swept off her feet by the dashing Lenny through their mutual love and connection of family, the Catholic faith, the beloved New York Yankees, and music. Mary and Lenny saw numerous shows in New York including Lenny’s favorite crooner Frank Sinatra, The Rat Pack, and Peggy Lee at the Copacabana. Lenny and Mary ended every date with a great Italian meal and wonderful memories.

The courtship continued when Lenny valiantly served in the United States Marine Corps from 1951 through 1953 as a Lance Corporal during the Korean War. Lenny proudly spoke both of his service and the fact that legendary baseball great Ted Williams was one of his platoon leaders. Lenny continued to write to his sweetheart and sent Mary his certificate for achievement in cooking while in the Marines. Thus, the deal was sealed.

While starting a family, Lenny worked for Westinghouse in the Elevator Production Division. After 26 years, Lenny retired when the plant closed in 1981.

In 1995, Lenny and Mary moved to Verona to be closer to their children and grandchildren where they became parishioners of Our Lady of the Lake Church. Although a far departure from their Copacabana days, Mary and Lenny quickly found their footing and enjoyed attending 4:30 p.m. Mass every Saturday night followed by a bite to eat. They took great comfort in the kindness and religious counsel shown to them and would form lifetime bonds that only strengthened their faith.

Lenny was very popular in town serving as a Crossing Guard in Verona for many years. He could not walk down the street without someone waving hello or yelling out to “Mr. Lenny.” He was a vivacious, kind, caring, and a gentle soul. Lenny’s friendliness and laugh were contagious. For Lenny, he never met a stranger, only a new friend. Lenny was on a first name basis with every employee at ShopRite, from Jersey City to Essex Fells.

His passions were quite simple—his family, the Church, the New York Yankees, and Frank Sinatra. Lenny was happiest with simply sharing a great Italian meal with his family and some laughs and Frank Sinatra playing in the background.

Lenny could guide you through the back roads of Jersey City and Bayonne without hesitation. Forget the lady talking to you in the car, Lenny could always provide accurate updates on the weather and directions back home to Jersey City.

Both as a father and grandfather (Pop Pop), Lenny never missed an opportunity to support or call his children and grandchildren. His selflessness knew no limitations. He attended every activity for his children and instilled the core values of respect, integrity, and hard work. As a grandfather or Pop Pop, Lenny was no different. He was present at every swim meet, every play, every baseball game, and every opportunity to fish with his grandchildren. At 91, Lenny would take out his magnifying glass and make weekly calls to his grandchildren to see how the weather was in south jersey and that they were doing okay.

Lenny will be sorely missed every day. He is survived by his three children, Antoinette, Leonard (Lenny) and his wife Lori, Angela Coyne and her husband Kevin; grandsons, Lenny and Nicholas and nieces and nephews.

Visiting will be held in the Prout Funeral Home, (www.proutfuneralhome.com), 370 Bloomfield Avenue, Verona, NJ on Monday, March 7 from 3 to 6 pm. A Funeral Mass will be celebrated on Tuesday, March 8 at 10 am in Our Lady of the Lake Church, Lakeside Avenue, Verona, NJ. Interment will follow at Holy Name Cemetery in Jersey City.

In lieu of flowers, donations in Lenny’s memory to the American Heart Association (www.heart.org) would be greatly appreciated.

Please visit proutfuneralhome.com for livestreaming information and to leave a condolence.