The seniors on Verona High School’s softball team have been playing together since they joined an 8U Recreation Department team. Yesterday afternoon, they celebrated all those years of play–and then knocked Livingston High School for a loop.

Livingston is the No. 3 team in NJ.com’s Top 20 rankings, but senior spirit and memories of an 11-10 loss to Livingston early this season gave Verona an incentive to outperform–and they did. Senior Carlie Goldstein pounded out a two-run homer. Verona juniors Faith Reed and Sara Bochicchio added to that with an RBI apiece. Melanie Naeris, also a senior, was on the mound and she gave the Lancers barely any opportunities to get anything on the scoreboard: Deja Robinson’s triple was one of only six Livingston hits. The 4-1 loss to Verona was Livingston’s first on the season.

Verona softball is now 8-4 overall and 7-3 in conference. They take on Columbia High School tomorrow morning in the second round of the Essex County Tournament. 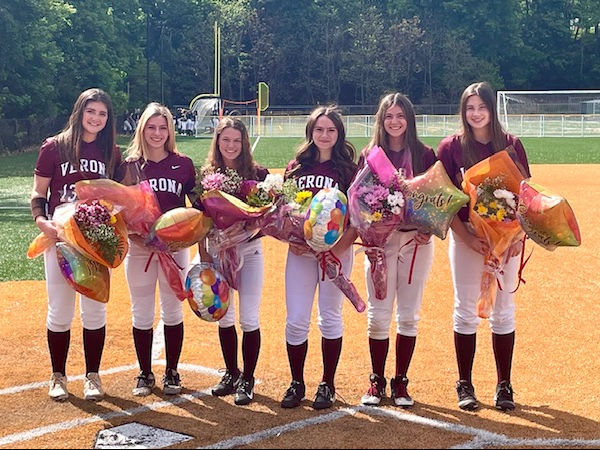