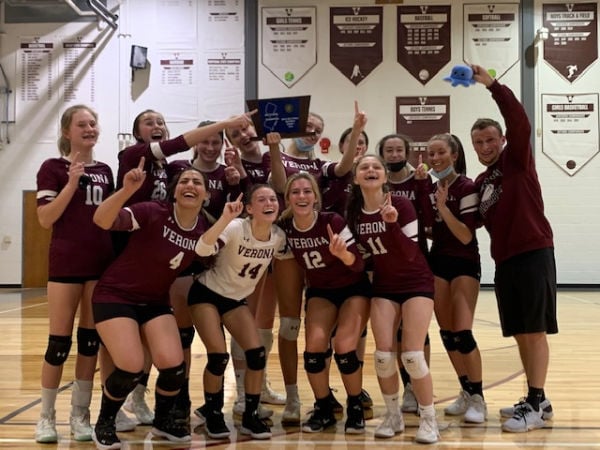 Verona volleyball has been no stranger to the North Jersey Sectional finals in recent years. But after season scrambled by a deadly pandemic, yesterday’s victory over Lyndhurst for the N2G1 crown was sweeter than ever.

Verona owned the first set, which ended in a 25-15 victory. But Verona fans spent much of the second set holding their collective breath as the team battled back from a deep deficit. And Verona rallied, it rallied in a big, big way, scoring nine of the set’s final 10 points and securing a 25-21 win. “I never doubted them for a minute,” said Coach Ryan Brown.

There were a lot of happy tears on the court after the team lifted a trophy in celebration–just not their trophy. The NJSIAA had failed to deliver a commemorative in time for yesterday’s came, so Verona Athletic Director Bob Merkler pressed an old one into service for the photo op. 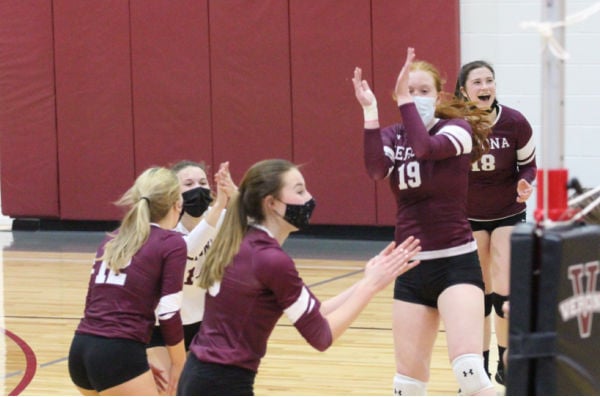 The players were not fazed. “We’re so happy,” said Jessie Loudon, one of the team’s three co-captains. “After losing last year and starting this year so late, this just feels great.” Last year’s team lost to Kinnelon in the finals after securing a stunning upset over Wood-Ridge.

Meghan Meehan, another of the team’s co-captains, led her squad in digs (15) and kills (12). Patricia Rakova was close behind with 11 kills.

There won’t be much time for celebration though. Several members of the team, including Meehan, Loudon and fellow co-captain Sinclaire Infusino, also play softball, and that sport kicked off Monday, April 19 with a 14-0 victory over West Essex. Look for the two-sport athletes in the lineup on Thursday, when Verona travels to Livingston.