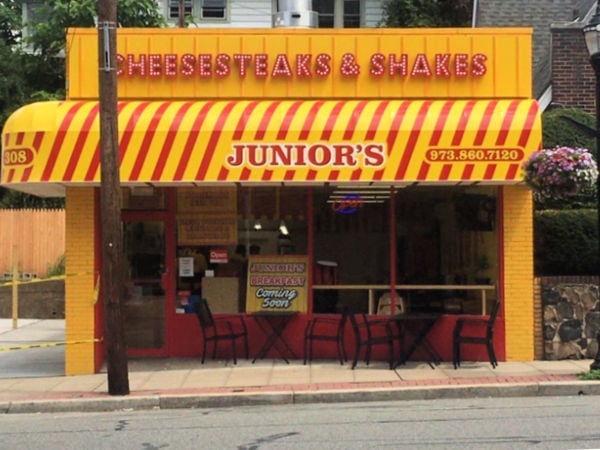 On Monday, June 15, New Jersey entered phase II of its coronavirus reopening plan and many Verona restaurants reopened with outdoor dining. For one Verona eatery, it was time to open for the first time.

Junior’s Cheesesteaks & Shakes is managed by Michael Biondolillo, Vinny Pagano and Richie Cancero, three cousins from New York and New Jersey. As Italian-Americans, the cousins say they were always passionate about food and had dreams of someday opening a restaurant from a young age.

Last summer, the cousins attended a family barbecue and enjoyed some rib-eye cheesesteaks. Over the dinner, they discussed what makes a quality cheesesteak, and concluded that most purveyors generally offer very similar frozen, pressed and processed meat.

“Just as we were enjoying quality cheesesteaks at the barbecue, we asked ourselves why we had never found good cheesesteaks elsewhere,” Biondolillo says. “For us, the idea then evolved into opening a restaurant to offer cheesesteaks similar to the quality as at our family’s barbecue. The question was simple: Why not open a cheesesteak restaurant?”

Each partner brings a unique skill set to the restaurant. Biondolillo’s entrepreneurial spirit, work ethic and experience across various industries bring a multitude of valuable skills to the management aspect of the business. Cancero previously owned a restaurant and bar in Nanuet, N.Y. and partnered at several sports bars. Pagano spent the last three years in financial services in New York City, and his free time analyzing the consumer psychology behind making purchases at restaurants and the financial aspects of restaurant management. As they worked on their idea, however, each became a jack-of-all-trades.

“There are no cutting corners,” Biondolillo says. “It is extremely important to be highly involved in every detail of your business if you want to have a chance at success.”

The cousins devised a menu that includes not only cheesesteaks, but also burgers, jumbo hot dogs, specialty sandwiches, mac & cheese, wings, hand-spun milkshakes, and a wide range of snacks and sides. They named the eatery Junior’s after their little cousin Michael Jr., to influence his career in restaurant management.

After an extensive search for a location, the cousins finally came across a spot on Bloomfield Avenue near Malvern Place at what they agreed to be the right place and right time. They say they immediately felt that the tight-knit community of Verona was the perfect place because of its kind people, diversity, and size.

“Opening the business in a small town like Verona will hopefully allow us to grow our business from the beginning, saturate a niche market of boardwalk food lovers, and ultimately expand our business,” Cancero says. “The vibe we’ve received from the community of Verona has been very supportive.”

The cousins are optimistic for their new business but aren’t disclosing projections. “We are firm believers that performance greatly outweighs speculation,” Pagano says. “Also, given the current condition of our national economy it would be difficult to accurately make those kinds of sales projections. We would like to see our numbers and let them speak for themselves after our first year of business. We don’t want to under- or overvalue our business when the economy has been so volatile in recent months and consumer savings are at a historical all-time high. It just wouldn’t be fair to say right now.”

The pandemic delayed construction and opening, and changed their operating plan. Currently, Junior’s offers online ordering, curbside pick-up, delivery, takeout and outdoor seating. Though it has seven employees, they work a staggered system to facilitate social distancing. It follows restaurant best practices for regular cleaning, sanitizing, and disinfecting. It also has had to cope with skyrocketing prices for red meat.

While all of the economic, social, and health uncertainty that accompanied the opening was not ideal or expected, the cousins are firm in their belief that creating a fun food experience will uplift Veronans and unite everyone on a larger scale. “At the end of the day, our business is working toward changing up the restaurant scene and showing people that any idea can be set into motion,” Biondolillo says. “We are eager to greet the day that Junior’s becomes well known not just to citizens of Verona but permeates to people everywhere.”