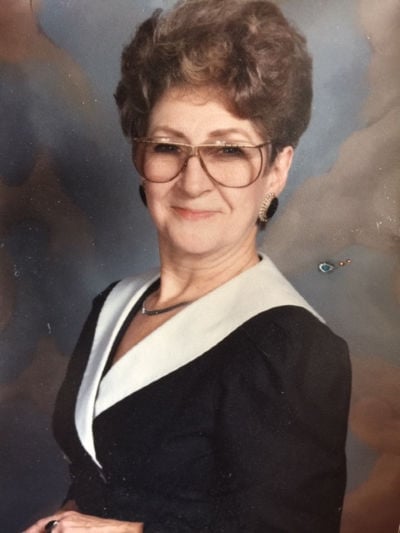 Born on October 15, 1931 to Alfred and Emma Clark Deremer McCambley, Inez lived in Verona for over 60 years. She grew up in Newark, Maplewood and East Orange and attended Columbia and East Orange high schools. After marrying Charles David Walsh, a Navy veteran, and after giving birth to two daughters, Inez worked as a waitress and was a proud member of Local 108 Waiters and Waitresses Union.

In the late 1950s and early 1960s she was employed as a traffic manager in the garment industry where her natural organizational and managerial skills flourished. The next 30 years saw Inez through numerous civil service promotions, advancing as an employee of Essex County Hospital Center (formerly Overlook Hospital) from clerk-typist to coordinator of volunteers. In the early years she was active in the Essex County Employee Association, was a member of the board of directors and having been elected in 1965 the first woman vice president of the organization, served 3,500 members county-wide for seven years in that position.

Justice, fairness and truth were of the utmost importance to Inez – her heart was always with the underdog and so she spent many an hour counseling employees and friends of their rights. In 1973 she was appointed to the first Hospital Policy and Procedure Committee and was elected chair in 1974 and in that same year became an executive committee member of the non-profit PROJECT PASSAGES, whose mission was to develop an after-care program for patients discharged from mental health facilities.

Inez was appointed in 1975 to the New Jersey Hospital Association’s Governmental Relations Political Strategy Committee and helped develop workshops and programs in the utilization of volunteers while serving as an advisory member of Rutgers’ Continuing Ed Program and the VOLUNTEERS COUNT committee of United Way.

In 1980 Inez was a charter member and organizer of the Essex County Managers and Supervisors Association and served on the negotiating team for the Hospital, Guidance and Geriatric Centers as second vice president until 1990.

As a caring, dedicated coordinator of volunteers for nearly 20 years, Inez initiated many innovative and creative programs for the Hospital Center’s residents, including off-campus day trips, special events and holiday celebrations and she would enlist individuals, businesses, civic, community and church groups with her enthusiasm and persuasiveness to implement plans and ideas.

In recognition and appreciation for their contributions to the residents’ well-being, Inez created the volunteers Make News newsletter, distributing 1,000 copies quarterly. She always made sure the Hospital Center’s volunteers knew of her gratitude, on behalf of the residents, at an annual dinner given in their honor.

After so many years of dedication she retired in 1992 to spend more time with her elderly mother.

Through the years while advancing her career, Inez became involved in politics and developed a passion for community activism. She could be seen and heard at many town governmental hearings and meetings where she would keep office-holders on their toes by doing her research and requiring clear answers to her pointed questions. Having been a “Depression Baby,” she was especially budget conscious and frugal and would urge those holding the purse strings to practice fiscal responsibility.

In 1962 Inez became the Democratic Committee member representing Verona’s 8th District and in 1970 was elected the town’s vice chair of the party.

She waged a vigorous campaign in 1985, walking door-to-door throughout Verona and urging citizens to “vote against more traffic, pollution, noise and congestion; vote against over-development [and] vote for Pignatello and Walsh.”

She was elected to Town Council, assuming the roles of chair of the Personnel and Civic Affairs Committees along with her positions as vice chair of the Sewer and Water Committee and as liaison to the Board of Education.

One of the fondest memories Inez had of her days in politics was her trip with the Democratic Women’s Club of Verona to the National Convention held in Atlantic City in 1964 where, aside from having a great time with her like-minded friends, she joined in the 22-minute ovation given then to Attorney General Robert F. Kennedy.

One of her proudest moments occurred in 1991, when she was declared Irish Woman of the Year by the Board of Chosen Freeholders of Essex County. This honor was entered as a Congressional Record Proclamation by Congressman Donald Payne.

Inez was a captivating story-teller and with sharp wit, great sense of humor and love would regale her family, friends and acquaintances with funny and fond memories of her youth spent in Newark and Maplewood – whether it be her first taste of Italian food (and wine!) offered by her neighbor on Hunterdon Street, where three generations of her family resided, or picking out a chicken to carry home, feathers and all, to her grandmother, she would hold the attention of her audience.

She was a patriot always and recalled when during World War II she wanted to join the WAVES but was too young. To serve her country she started a club with three friends to purchase items to be sent in a “Buddy Box” to servicemen oversea; she wrote numerous letters to those in the military who hailed from Maplewood and baked many cakes for the USO in Newark.

Inez was always athletic and as a teenager, while working as a locker girl at Olympic Park pool, she had the opportunity to become an excellent swimmer and diver.

As an adult she loved and cod and blue fishing off Atlantic Highlands and delighted in telling the story of a winter outing on a party boat when, while wearing a navy pea coat and wool cap, she was asked for “a light” and upon offering it came the exclamation: “You’re a WOMAN!”

Inez enjoyed a challenge- physical as well as intellectual. She became a recreational skier in her 30s and always relished a good debate. She was quick to give advice and especially enjoyed “advising” on political websites. Her willingness to take on a challenge, strong will, determination and grit carried her ever forward her whole life.

Inez was a devoted daughter and was a constant companion to her mother until her passing in 1999. She took much pleasure in sharing her wisdom, humor and love with her daughters, son-in-law and grandchildren, who will miss her immensely.

Donations in her memory to the Verona Rescue Squad, 12 Church Street, Verona, NJ 07044 would be appreciated. Condolences may be left at proutfuneralhome.com.