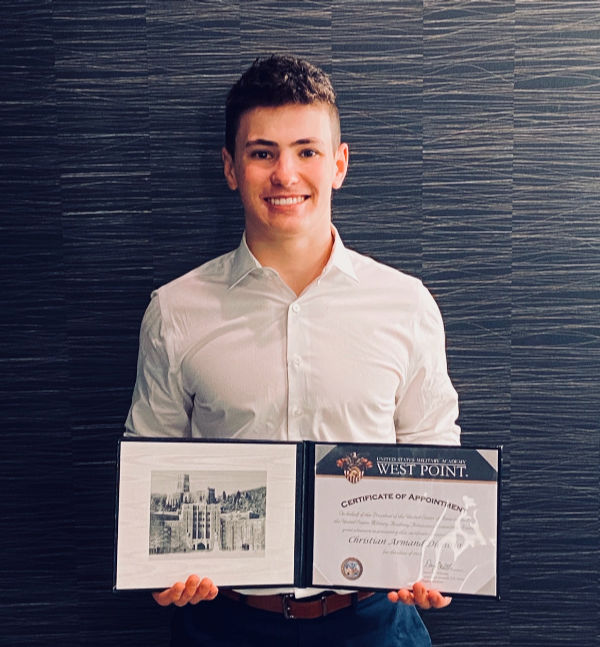 When Christian Dionisio was a sophomore at Verona High School, he visited West Point with his family for a history tour. His mother’s father had been in the Navy and, later, a colonel in the Army Reserves. It was the first time that he had been to the United States Military Academy, but he came away with one clear thought: “I could see myself here,” he recalls.

This June 29, he will. That’s when Dionisio, who graduates VHS with the Class of 2020, reports to begin his studies at West Point and a career serving the U.S. “I’ve always thought that serving was something that I wanted to do,” Dionisio says. “It is a civic duty.”

Dionisio’s grandfather died before he was born, but he says he had heard his stories of service. Two years ago, he got a newer perspective on what that kind of life might be like from Col.(ret.) Joseph A. Simonelli Jr., a 1983 graduate of VHS and West Point alumni.  VHS Football Coach Kevin Batty had invited Simonelli and other former Verona players back to speak to the team about life after football. “Part of being a West Point alumni is to help students achieve their goals,” Simonelli says. He served 30 years in the U.S. Army and was the chief of staff at Arlington National Cemetery.

Simonelli’s visit impressed Dionisio, who was then a junior. “He was somebody raised in the same town that I was,” Dionisio says, “and hearing what West Point brought to his life offered me another opportunity to ask more questions about it.” Dionisio applied for, and was accepted to, West Point’s Summer Leaders Experience between his junior and senior year at VHS. The highly competitive program gives high school juniors a taste of the classes, military training and physical fitness regimens that they would face as a cadet. Simonelli invited Dionisio to West Point football games, where he could talk with current cadets.

Even with that experience, admission to West Point wasn’t a given. Prospective cadets need top grades and a nomination from a member of Congress or the vice president. Dionisio’s nomination came from Rep. Mikie Sherrill, a graduate of the U.S. Naval Academy. But he also applied to 10 other schools, most with an ROTC program. “I thought that was a good plan B,” Dionisio says. Many former VHS students have needed such a plan. According to Jennifer Gadaleta, director of school counseling, VHS students applied unsuccessfully to West Point in 2014 and 2016, two were turned down at the Naval Academy in 2014, and students were denied acceptance at the Coast Guard Academy in 2009, 2010 and 2011. Luke Sniatkowski, VHS ’13, was the last VHS student to be accepted to a service academy, the Coast Guard. (Verona also had two West Point graduates in 1974: Bill France and Bob Scharling.)

There is one other path in to a service academy, which another former VHS student used. Nicholas DeMiro had also been inspired to apply to West Point by Simonelli, who had returned to Verona in full uniform during his first year at the academy. But DeMiro heard nothing from West Point until the day after VHS graduation in 1984, when he got a call from an army major offering him a spot at the United States Military Academy Preparatory School, a one-year stepping stone into the academy itself. DeMiro recalls that he was given just two hours to make a commitment–which he did. “For an 18 year old coming out of high school, it’s one of the world’s best well-kept secrets,” DeMiro says, noting that the other service academies also have prep schools.

DeMiro graduated West Point in 1989 and then did a year in flight training stateside before being deployed to Germany during the first Gulf War. After six years active service, he went to work in industry, and considers himself to have been very well prepared. “The rigor, the training, the stress that you’re placed under with your military service teaches you how to persevere in difficult times,” says DeMiro. “It prepares you for a future in just about any field.” DeMiro started at a producer of auto and highway steel and rose to become the president of Mayco International, a top auto parts supplier.

Rep. Sherrill applauds Dionisio for his commitment. “It was my privilege to nominate Christian Dionisio to the U.S. Military Academy at West Point from NJ-11, and I am thrilled to hear of his appointment,” she says. “Christian has shown leadership and a commitment to service in his community, on the field, and in the classroom. Like me, he is inspired by his grandfather’s commitment to service in the military, and I look forward to seeing how Christian carries on his own family legacy. I congratulate Christian, his family, and Verona on this exciting news.” 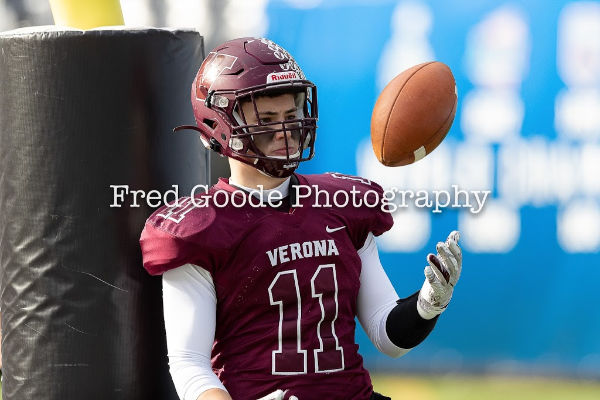 Previous article
Verona Declares State Of Emergency
Next article
Town Reminder: Keep Your Distance While School Is On Remote