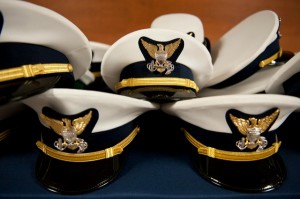 When they toss their mortarboards into the air on June 21, most members of the Verona High School class of 2013 will be looking forward to several weeks of rest and relaxation. For Luke Sniatkowski, the break will be only several days: He has set his post-graduation cap on the U.S. Coast Guard Academy and his studies in New London start on July 1. It’s a commitment that will last for the four years that his friends are in college, and at least five years beyond.

The Coast Guard Academy is, with West Point, the Naval Academy, Air Force Academy and the Merchant Marine Academy, one of the so-called federal service academies. Their job is to train commissioned officers for the different branches of the U.S. armed forces, but students get a top-flight degree–most often in an area of engineering or science–and the education is tuition-free. While several VHS graduates have enlisted over the years, it has been rare for any to apply to the service academies. According to Kimberly Ferlauto, director of school counseling at VHS, since 2007 only two students have applied to the Naval Academy, and four to the Coast Guard Academy. There have been no applications or appointments to the Air Force Academy or West Point.

“It is about serving our country,” says Sniatkowski. “My father’s uncle was in the Coast Guard during Vietnam and my grandfather served in the Army during the Korean War. It wasn’t a huge emphasis in my family. It was my choice.”

And if you think applying for college is tough, consider what has to happen to get into a service academy. Sniatkowski began planning his applications to the Naval Academy and Coast Guard in his sophomore year. “I had to take an engineering-oriented schedule and as tough a schedule as I could while balancing varsity sports and a lot of leadership stuff,” he says.

The academies look for students committed to serving their country but also to those who are strong in academic, sports and community service. Sniatkowski was a four-year starter on football, a three-year starter on basketball and baseball, an honor roll student and a member of the leadership committee of the Youth Group at Our Lady of the Lake. He participated in both football and baseball camps at the Naval Academy, as well as its Summer Seminar between his junior and senior years at VHS. “You go down and get a taste of what it is like too be at the Academy,” he says.

A college application may need letters of recommendation from a teacher, but applications to all of the service academies except the Coast Guard demand a nomination from a member of Congress. Sniatkowski’s application came as Verona was being shifted from one Congressional district to another. He got a nomination from Rep. Bill Pascrell, but VHS underclassmen will now have to apply to the office of Congressman Rodney Frelinghuysen–who holds an “academy night” every April–or Senators Frank Lautenberg or Bob Menendez.

Even with a nomination, acceptance is not a lock. There are several rounds of consideration at the academies and applicants can be rejected at any point. According to U.S. News & World Report, the Naval Academy accepted just 7.5% of those who applied for fall 2011 admission, giving it the sixth lowest acceptance rate of all institutions that year (Yale accepted 7.7% of those who applied).

Sniatkowski made it all the way to the third round of the Naval Academy but did not secure a spot. He only learned that he was a potential finalist for the Coast Guard in mid-April, and when the academy’s offer came on May 1, he had to quickly weigh it against playing football for Wagner College or baseball for Fordham University.

Since June 2010, the “What’s Next” series has explored many of the choices made by graduating seniors at VHS. You can read all of the stories here.